How Musical Training Influences Memory and Attention in Children

Musical training can improve executive functioning skills in children and be beneficial for their learning. These benefits can last a lifetime. 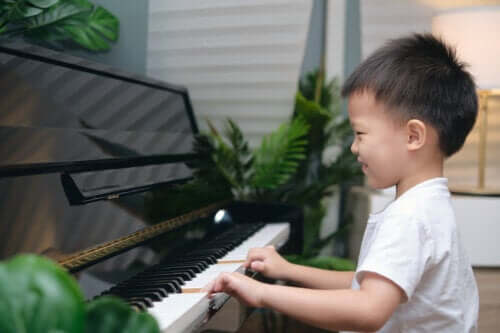 Many parents want to make sure that their children receive musical training. The reason for this is that playing an instrument is said to bring a lot of benefits. In this sense, one of the most interesting benefits of musical training has to do with the development of memory and attention.

For several years already, many scientific studies have proved that musical training offers great benefits for children’s brains and mental processes. As a consequence, this artistic activity has become an important option to consider as a complement to academic training in childhood.

A study published in 2020 by the Frontiers of Neuroscience Journal showed that music training can improve attention and working memory. What’s more, according to this study, the cognitive benefits of musical training can last a lifetime.

In addition, according to this article, participating actively in music training during childhood can bring many benefits to the executive functions. These benefits have to do with working memory and social-emotional learning. The article also shows that musical training can have a positive impact on students with learning and development disorders.

On the other hand, a very important matter that the study highlights is that even though the main developmental benefits occur when musical training begins at an early age, it’s never too late to learn music. The reason for this is that music training will still be beneficial to attention and working memory.

It’s worth mentioning that a previous study published in 2019 by Heliyon journal had already shown that playing music improves the ability to suppress distractions. In fact, according to this article, the more time we spend with musical training, the more control we gain.

In fact, researchers point out that music training produces lasting improvements in the cognitive mechanism that help people be more attentive and less likely to get distracted while performing exacting tasks.

Several research studies have been done about the benefits of musical training, not only for children but for adults as well. For example, Frontiers of Neuroscience had already published a study in 2014 about the way music training affects cognitive development.

This article proved that musical training in childhood not only enhances many cognitive functions but is also accompanied by neuroplastic changes in brain structure and function.

Although the influence of musical training is stronger during sensitive periods, researchers also highlighted that brain plasticity induced by music occurs during adolescence and even adulthood as well.

However, the first evidence that musical training affects brain development in young children was published in 2006 by the journal Brain.

Even then, Oxford University researchers found that young children who take music lessons show different brain development and improved memory over the course of a year compared to children who don’t receive music training.

After going over the most relevant scientific discoveries regarding music education in childhood, we can ask ourselves this question: does music make children smarter? Not really, actually.

At least that’s what a study published by Memory and Cognition in 2020 concludes. According to this article, musical training may not make children more intelligent. Researchers found that musical training doesn’t have a positive impact on children’s cognitive abilities. This means that it has no influence over their memory, academic achievements, or subjects such as math, reading, or writing.

To conclude, for parents who wish that their children study music, we can advise you to do so because of the pleasure that playing an instrument gives and for the opportunities it offers to broaden their experiences in life. What a wonderful thing music is!

Music Can Boost Your Children’s Creative Process
Music can play a big role in boosting your children's creativity. But how does it do this and how can you help your children develop their creative process? Read more »
Link copied!
Interesting Articles
Emotional education
Solomon Syndrome in Children: What Is It? How Can You Avoid it?