Forgiveness: A Fundamental Gift in Any Family Relationship

Forgiveness is among the greatest gifts we can offer others and ourselves. When we forgive, we take a huge weight off our shoulders which allows us to move on. 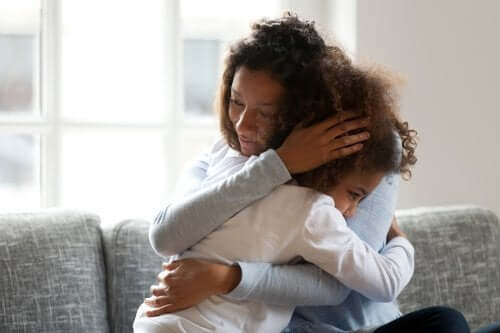 One of the greatest gifts we can give ourselves at any moment and in any place is forgiveness. Though it may not seem so, every relationship – in a family or otherwise – forgiveness is fundamental. It allows us to move on and avoid getting stuck in suffering.

It’s a very common misconception that teaching the value of forgiveness during the early years of life is sufficient. In reality, it’s something you need to work on constantly in order to avoid forgetting how important it really is.

Forgiveness is an exercise of flexibility which shouldn’t follow the pattern of a straight line. Rather, it’s something that must adjust to the circumstances.

Forgiveness is a gift

At certain points in our lives, we all have the need to make the most important decision of all… Whether or not to forgive. This occurs because no one is exempt from making mistakes – not even you. Nor are we exempt from hurting others, or from others hurting us.

Sometimes we think that not forgiving someone is the best way to punish a person who we feel has betrayed us. However, forgiveness isn’t so much something that the other party needs. Rather, it’s something we deserve and need in order to move on in peace.

Certainly, we may feel anger, rage, frustration and even pain when someone hurts or betrays us. It’s normal to feel sometimes that our feelings won’t allow us to forgive or to move on easily. But what’s true is that, once we really decide to truly and sincerely forgive, something magical occurs.

We take an enormous weight off our shoulders. The act of forgiving often does more for the person forgiving than the one being forgiven.

Forgiveness isn’t just a blessing you deliver to another human being. Forgiveness is also a gift you give yourself.

Of course, that doesn’t mean forgiveness is easy. It can take months or even years to learn to understand the value of forgiveness… Offering forgiveness to those who we believe don’t deserve it at all is a great exercise of maturity.

It’s important to step back for a few minutes and ask yourself what you gain by holding onto your anger. Does it really make you more dignified, or does is simply fill you with negative emotions and feelings?

Of course, we’re not saying you should throw around forgiveness just for the sake of it. Rather, we’re talking about letting go of negative feelings. The only person you really hurt with your grudges, in the end, is yourself.

Although forgiveness is an act of bravery, there are still many people who believe that it’s a sign of weakness. So, instead of recognizing their own mistakes and seeking out the common good, they use their pride as a shield.

Forgiveness and its keys

Some keys to being able to get rid of the burden of anger, leave offenses in the past, and moving on are the following:

The first step in forgiving is learning to see past your anger. Once you’ve calmed down, you can better evaluate the situation and become willing to forgive.

This is because it takes more than just saying “I forgive you.” It’s about feeling it. Therefore, you really need to feel convinced that you want to forgive. And to do so, you need to take the necessary time to really forgive. Otherwise, saying it without meaning it will only cause you to build up more resentment.

Expressing what you feel is the next step when it comes to turning over a new page. Of course, that doesn’t mean blurting things out in the heat of the moment. Rather, it means calmly thinking about what you want to say so that the other party understands your feelings. When we express our feelings, we begin to free ourselves.

Once you’ve talked about whatever is bothering you, the time will have come to let things go. From now on, it’s up to you and you alone to free yourself of those negative feelings and emotions. It’s up to you to have the courage to stop giving importance to the offense in order to move on.

Once you’ve forgiven, then you no longer need to continue dwelling on the issue. With the arrival of forgiveness, you can let go of your fear, anger and resentment. Imagine that these feelings are balloons that you release and allow to float away into the sky, never to return.

Just as we said above, forgiveness is a value that we need to put into practice regularly – for our own good and for a better future. This means that we don’t only need to teach our children to forgive, we need to accompany them and guide them. And, on occasion, they may be the ones that guide you.

The Feeling of Guilt in Children
The feeling of guilt is something we learn through life experiences. Discover ways to teach your children through responsibility and not through guilt. Read more »
Link copied!
Interesting Articles
Raising a child
How to Explain the Water Cycle to Children