How to Explain the Greenhouse Effect to Children

The future's in our children's hands. Adults, parents and teachers alike have the task of teaching them to care for the planet and to know the consequences of human actions on the environment. The greenhouse effect is one of the most important issues. 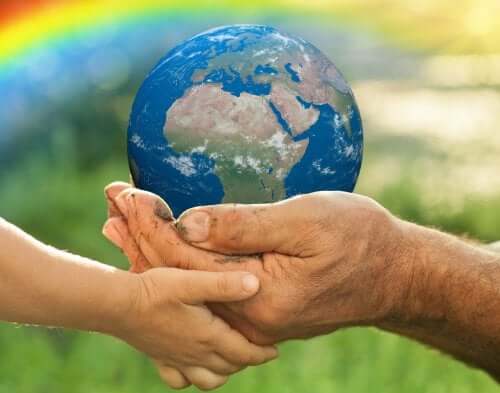 Children will be the ones responsible for looking after our planet in the future. This is a vital task that requires the right knowledge and tools. For this reason, it’s so important to explain to them what the greenhouse effect is from an early age. In this way, they’ll grow up already aware of the situation.

However, it’s not an easy concept to explain. You’ll have to find a simple way to get the message across, in order for them to understand it easily. The use of games or stories can be a great resource here. We’ll now look at some ways that can help you to explain the greenhouse effect to children.

The greenhouse effect in simple words

To explain to little children what the greenhouse effect is, it’s best to use real-life examples. You can explain to them that every time they shower or turn on the light, they need energy. That energy is obtained by burning some type of fuel such as gas, coal, or oil.

By burning those substances, we send a huge amount of gases into the layer of air that surrounds the Earth (the atmosphere). These gases accumulate in the atmosphere and don’t allow the heat to escape into space. For that reason, the Earth’s temperature is rising.

This phenomenon is known as the greenhouse effect. Experts have chosen the term “greenhouse” because it’s the same effect as when you build this type of shelter to protect your plants from the winter cold.

It’s also important to explain to the children that having a shower or turning on the light are only a very small part of the things that cause this accumulation of gases. Gases from cars and factories, for example, are other areas that produce these gases.

To finish off the explanation of the greenhouse effect, we need to explain why rising temperatures are bad news for our planet. You can explain to them that this excess heat causes the ice on the Earth’s poles to melt.

As a result, sea levels are rising, and this can cause flooding. It may also cause more extreme weather, including storms. This is what we know as global warming, or climate change.

Once you’ve explained to the children what the greenhouse effect is and why it’s so harmful to the planet, you’ll then need to tell them that there are some things they can do to help. This way they’ll feel involved, and that will, hopefully, motivate them to take action and to involve their families too.

Like adults, children can also do many things to help reduce the greenhouse effect. One of the secrets, as we’ve mentioned before, is to save energy and respect nature.

There are some very simple things that children can do. One of them is to go to school by bus and not by car. That way, a single vehicle will transport several children instead of each of them traveling in their own car. Car sharing is another good option here.

Another step that children can take is to have a shower instead of a bath, and to do it as quickly as possible in order to consume less gas or electricity. Another very simple gesture that will also help to reduce the greenhouse effect is for them to turn off the lights and TV when they’re not using them.

And, of course, from childhood, you need to teach them the importance of recycling. They need to understand how these items can have a second (or third) life.

To help parents and teachers in the task of explaining the greenhouse effect to children, there are also several stories that can be very useful. These books have been specially created to address the problem in an easy and didactic way so that children can understand the concept and feel involved.

Here are three great books to get you started:

In short, explaining to children what the greenhouse effect is can be complicated, but not impossible. It’s all about raising awareness in our children about the need to take care of our planet, as this will result in great benefits for future generations.

4 Books About Science for Children
Children often find science fascinating, so we're sure these books about science will thrill your kids and leave their imagination and curiosity soaring. Read more »
Link copied!
Interesting Articles
Social environment
What to Do If Your Child Doesn't Play with Anyone at School