4 Differences Between Talented and Gifted Children

Surely, children who stand out above the rest in some intellectual capacity attract your attention. These children are usually considered talented or gifted. Discover the main differences between the two terms in this article. 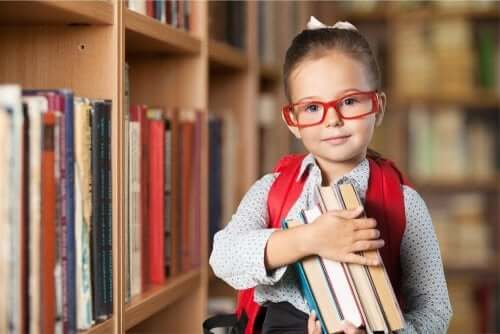 Intelligence refers to the cognitive ability of human beings. When a person stands out above the rest in one or more intellectual aspects, they’re talented. However, they might also be gifted. That’s why we decided to write this article to help explain the differences between talented and gifted children.

“Intelligence is the capacity to solve problems or to fashion products that are valued in one or more cultural setting.”

The definitions of talented and gifted

Talent refers to the presence of a level of development, knowledge, or skill that’s greater than expected for chronological age. This term encompasses different extraordinary intellectual profiles. Thus, talent can be classified into:

And in three types of talents:

Therefore, this category encompasses both talented and gifted people.

What does it mean to be gifted?

Gifted people are talented. The World Health Organization (WHO) considers that a person is gifted when their intelligence quotient (IQ) is equal to or greater than 130. But according to Renzulli’s three-ring conception of giftedness, in addition to this criterion, they must also meet two other characteristics:

4 differences between talented and gifted children

In addition to the definition itself, there are four fundamental differences between talented children and those who are considered gifted. However, we should note that none of these characteristics should be generalized.

Most talented children show specific skills in one or more areas of intelligence.

On the other hand, gifted children stand out in all intellectual capabilities, including the eight types of intelligence we mentioned above, memory, and creativity.

In general, talented children often have socialization problems. In fact, they have difficulty communicating and establishing links with other children of the same age.

On the other hand, gifted children don’t usually present major social or emotional problems because they have high interpersonal intelligence and an ability to understand others.

Contrary to expectations, talented children can also fail at school. This is because they don’t receive an adequate educational response, which makes them become bored in class and decide to stop studying.

However, you can also find the opposite extreme. In other words, some talented children get excellent grades and stand out in class.

On the other hand, most gifted children have normal academic results. In fact, they’re students who often go unnoticed in the classroom.

Regarding self-esteem, talented children usually have high self-esteem. They have very good self-perception and self-confidence in their abilities. This may even lead them to treat their classmates badly.

On the other hand, gifted children have a balanced personality and good self-esteem. However, they don’t overestimate themselves. This is explained by their high intra-personal intelligence. In other words, the ability to know and understand themselves.

Conclusion on the differences between talented and gifted children

Now that you know the definitions and differences between talented and gifted children, you can be more aware. Maybe your child is in one of these groups.

Families have a very important role in the detection and evaluation of talented children, since they’re the ones who know their children best and can help define their capabilities and areas of interest.

Thus, if you have any suspicions, please immediately contact your child’s school or a professional in this field. Remember that it’s essential to provide these children with a variety of resources to enhance and promote the development of their skills and qualities.

How to Help Gifted Children at School
Gifted children often pose a problem for teachers as they don't know how to provide for their needs. How can a teacher help gifted children at school? Read more »
Link copied!
Interesting Articles
Social environment
What to Do If Your Child Doesn't Play with Anyone at School