Learning to Write with the Montessori Method 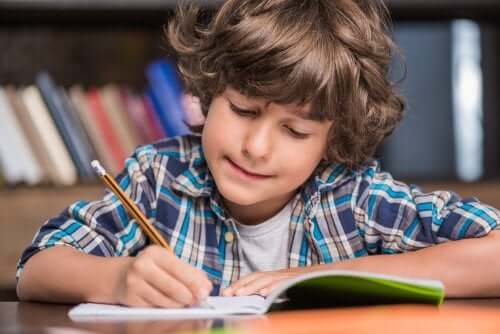 The Montessori method is increasingly being used in infant or early elementary school classes to help children learn how to write. This type of writing helps children to control the movement of their hand when making the strokes.

Maria Montessori was the woman who devised this method for learning to write. Thanks to her experience as a teacher, she developed this method to help provide children with autonomy when they start learning how to write. It’s been shown to help them acquire this skill easier.

Learning to write with the Montessori method: What does it consist of?

This method’s main characteristic is to separate the structure of the letters into three parts, divided by four lines.

This guideline helps children to achieve a higher level of perfection in their writing. There are two levels of difficulty: a 5-millimeter line spacing and a 3.5-millimeter one. By using this method, a child will need greater precision when forming the letters.

At what age can children learn to write with the Montessori method?

This method states that the reading and writing process can begin at 13 or 14 months of age. This doesn’t mean that children can already learn to write at this age, but simply that they can receive prior stimulation in order to make this process easier.

It’s important to awaken children’s interest in reading by reading them stories. In this way, we’ll help pave the way for them to practice writing when the time is right. In order to start using this method, the child will need to have gone through these phases of preparation.

Another thing to bear in mind is that we should take advantage of the times when our child is most receptive. Then, through play, we can adapt ourselves to their rhythm in order for them to learn progressively. It’s good to know that we can take advantage of any task in daily life to motivate children to learn to read and write.

Steps to follow to learn to write with the Montessori method

Children need to have acquired some prior knowledge in order to be able to cope with the step of starting to learn to write. We’re going to explain some of the steps you need to follow so that children can learn to write with the Montessori method:

Start learning to write with lowercase letters, rather than uppercase

Often, in schools they start teaching children to write capital letters before lowercase letters. However, according to the Montessori method, this should not be the case. In fact, it should be completely the opposite.

Why start teaching lowercase before uppercase? Because it’s easier for children to draw curves than straight lines, and that’s why learning to write capital letters should be left for later.

This means that, instead of teaching the letter “s”, you must teach the sound “ssss.” In this way, the child will associate the letters with the sounds and it will be easier for them to learn.

Carry out sensory activities to stimulate the senses

Even if the children are in the process of acquiring writing skills, we can complement this with activities to stimulate their senses. These can include passing objects from one place to another, going over sandpaper letters with their fingers while pronouncing them, and others.

Writing in a sandbox

For this activity, you should supply the child with a box full of sand and, next to it, cards with different letters. In this way, the child will be able to reproduce the letters they see in the sand. They can visualize the form of the letters visually and, at the same time, they’ll start to learn graphomotor skills.

After writing using the sandbox method, you can then move on to the mobile alphabet, in which the consonants are red and the vowels are blue. In this way, the child will understand that when the letters are put together, they form words.

Writing on a blackboard

Before the child can write on paper with the Montessori method, he or she must try out their writing on a blackboard. They’ll do this with chalk, which also serves to stimulate the child’s senses due to the composition of the chalk.

Writing on paper with the Montessori four-line method

Finally, the child can start to copy words in the pre-prepared lines of the Montessori writing method.

In short, learning to write with the Montessori guideline has enormous benefits for children. It allows them to achieve a more even, harmonious form of writing, with better directionality. In addition to this, the upper and lower limits help the child to follow the extensions of the ascending and descending letters.

Spelling and Literacy
Why It's Good that Your Children Learn Handwriting

Is handwriting becoming a lost art? Since the evolution of technology, inside and outside the classroom, handwriting has become less…

Spelling and Literacy
The Symptoms of Dysgraphia in Children

In this day and age, the ability to know how to write is fundamental to proper development. But there's a…