Rhotacism is the name given to the problem of not being able to pronounce the letter "r." In this article, we'll tell you everything you need to know about this pronunciation issue, which can affect both children and adults. 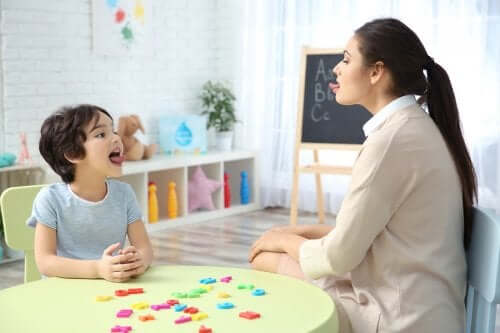 Learning to speak and pronounce the sounds of each letter in the alphabet correctly is not an easy task for some children. Many children, for example, have trouble pronouncing the “r” sound correctly when they start talking. This difficulty in pronunciation is known as rhotacism and is really quite common.

It’s an intermittent problem and, as a general rule, can be resolved through a series of exercises. Apart from the letter “r”, the soft “th” sound and the letter “d” are among those that create more pronunciation difficulties in children.

However, when a child reaches 5 years of age, he should be able to pronounce all the sounds perfectly. If this doesn’t happen, a visit to a speech therapist could help to determine the source of the problem and propose treatment.

As a parent, you shouldn’t worry too much, since the fact that a child has difficulties pronouncing the “r” sound isn’t too much of a problem and doesn’t imply that there are any problems at a psychological level.

However, if this problem can’t be resolved, then this can create some frustration in the child and can directly affect his or her self-esteem.

The treatment of rhotacism is usually very effective, both for children and adults. Normally, to solve it, you must reeducate the person in how they articulate the sound.

As you’ll see below, the exercises are usually very simple. However, first let’s take a look at what the main causes of this pronunciation problem are.

What are the causes of the rhotacism speech defect?

There are basically two factors that can cause children to have difficulties in pronouncing the “r” sound. On the one hand, it may be due to physical problems:

The other factor that influences rhotacism is at the functional level:

There are many exercises that will help children overcome their problems of rhotacism. Here are some examples:

In a variation of this classic Spanish board game, you have a board containing images that have the “r” sound in different positions. The child should roll the dice and repeat the concept or word that appears in the box. In addition, they have to make a sentence that contains that word.

Along with the letter “r”, the soft “th” and the “d” are those that create more pronunciation difficulties for children.

To overcome pronunciation problems, the idea here is to repeat the letter “r” over and over again. To make this possible, the child can imitate the sound of a motorcycle, or recite a tongue twister or other sentences that contain the letter in question.

The important thing here is that the child focuses his or her attention on the position of the tongue and on pronunciation. We recommend starting with single words, and later proceeding to phrases that include the sound several times.

To pronounce sounds well, breathing exercises are very important. A good activity here is to place domino tiles in a row, independently or jointly.

The child should knock the chips down one by one by blowing on them. Make sure they inhale well through their nose and inflate their cheeks, before finally blowing out hard.

Finally, remember that, in most cases, rhotacism is overcome before they reach 5 years of age. It’s often overcome thanks to the simple fact that the infant continually acquires better and sharper hearing.

Finally, don’t forget that your support plays a very important role. Also, keep in mind the effectiveness of practicing every day with your child.

Your understanding, tolerance and help will allow them to become aware of their mistakes and correct their pronunciation deficiencies gradually.

7 Speech Exercises for Children with Language Delay
Young children may show signs of a language delay without necessarily having more serious problems later in life. Preschool age children who have difficulties with language need support and stimulation. Speech exercises like the ones in this article can help many children to overcome language delays over time. Read more »
Link copied!
Interesting Articles
Spelling and Literacy
An Equality Collection: Equality in Children's Literature

Spelling and Literacy
Games that Help Improve Spelling in Children

Reading and writing are two basic abilities when it comes to communication and learning. In fact, today, these skills are…

Spelling and Literacy
Invisible Learning: What You Should Know

The purpose of invisible learning is to integrate different perspectives and theories into education, in order to understand learning in…

Spelling and Literacy
How to Use Blogs in the Classroom

Blogs can be a great educational tool and give students complete freedom to publish web content. However, it's important to…

When we talk, we shouldn't sound like robots – unless that's our purpose, of course! Every word and every sentence…