Students Who Study Music Do Better in Science

Practicing music is beneficial in many ways. In this article, discover why students who study music do better in science. 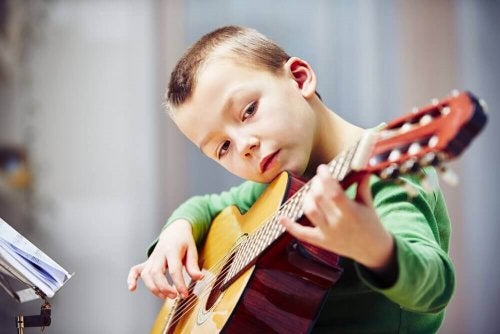 Many experts have been interested in researching the beneficial effects on learning in students who study music.

A recent study published by the American Psychological Association (APA) assures in its conclusions that children and young people who play an instrument do better in science. In this regard, children who play instruments improve their performance in subjects such as math, science, and English.

Students who study music or participate in music-related activities score significantly higher on science tests than their classmates. This was found in the study by Peter Gouzouasis and his colleagues at the University of British Columbia.

Research on the academic benefits of students who study music

The APA study included more than 110,000 British Columbia high school students who had started first grade between 2000 and 2003. In addition, these students had completed the last three years of high school and at least one standardized exam for math, science, or English.

Of these students, 13% played an instrument in a band or on their own. The experts only considered students who had at least taken one music course.

The experts obtained the data by comparing the test results related to their commitment to music. The goal was to discover if practicing music influenced these students’ performance.

The report has clear conclusions. It related playing instruments and the academic results of these students:

“Students who participated in music, who had higher achievement in music, and who were highly engaged in music had higher exam scores across all subjects, while these associations were more pronounced for those who took instrumental music rather than vocal music. On average, the children who learned to play a musical instrument for many years, and were now playing in high school band and orchestra, were the equivalent of about one academic year ahead of their peers with regard to their English, mathematics and science skills, as measured by their exam grades.”

In short, the study states that the more music a child learns, the better their test scores will be. Peter Gouzouasis, the lead author of the study, stated this.

The benefits of music for children

Music can have a positive influence on children from birth. A study was also conducted in Switzerland. It states that: “Medical imaging reveals that the neural networks of premature infants who have listened to this music, and in particular a network involved in many sensory and cognitive functions, are developing much better.”

Thus, the functional connectivity between the salience network and auditory, sensorimotor, frontal, thalamus, and precuneus networks, was indeed increased, resulting in brain networks organization more similar to that of full-term infants.

The latest findings on the academic benefits of music participation add to the evidence stated in many other studies.

The Importance of Music Class in School
Music class has shown great results in children's development. It's crucial for schools not to forget the importance of music in education. Read more »
Link copied!
Interesting Articles
Raising a child
How to Explain the Water Cycle to Children