What Is Rich Kid Syndrome? 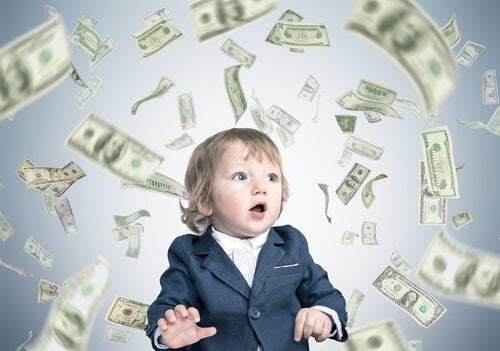 Material wealth doesn’t bring emotional wealth. Rich kid syndrome is real, and that’s why we want to tell you everything about it.

“Once upon a time, there was a man who was so poor, he only had money.”

We live in a society of extreme consumption. It’s no secret that society presents us with numerous products that make us believe we’ll be happy once we own them.

But is that really happiness? Child don’t give such importance to things. In fact, for a child, material objects are just a way to have fun, never an end in itself.

However, it’s reaching a critical point in which kids are now being educated by material items. Thus the “rich kid syndrome” is born.

Rich kid syndrome is a disorder associated with children who’ve grown up in environments of overprotection and material compensation instead of attention, time or affection.

It doesn’t necessarily have to occur in wealthy families, but also in middle class families who use these material resources as a method of raising children.

Those affected by this syndrome often present the behavior of a “spoiled child” who believes he is entitled to everything and doesn’t ask, but rather demands.

They tend to be lazy children who have very low tolerance for frustration. They don’t know how to manage not being given what they ask for. They also tend to be violent and show rage when they don’t get what they want.

These children end up suffering several problems in the development of their personality. When these children grow up, they usually have:

The really important things in life aren’t measured with material objects or achieved with money.

In many cases, the parents are to blame for this syndrome. In an attempt to introduce their children to this consumer society, many parents believe the important thing is for their children to have everything – and if they have two of everything, even better.

Many times, what the parents want is nothing more than to compensate for the time they cannot devote to their child, and they buy things to make up for their absence.

However, this is a serious mistake that can have unfavorable consequences for children.

In addition, many of these parents are characterized by being very permissive with their children, which leads to lack of limits and little compliance with standards.

What can be done to avoid rich kid syndrome?

Check out the first case of someone being exonerated for having “rich kid syndrome” at this link.