The Advantages and Disadvantages of School Uniforms

Before deciding on what school to send our children to, there are certain factors parents should consider. For example, the advantages and disadvantages of using school uniforms. There are opposing opinions on the subject. What side are you on? 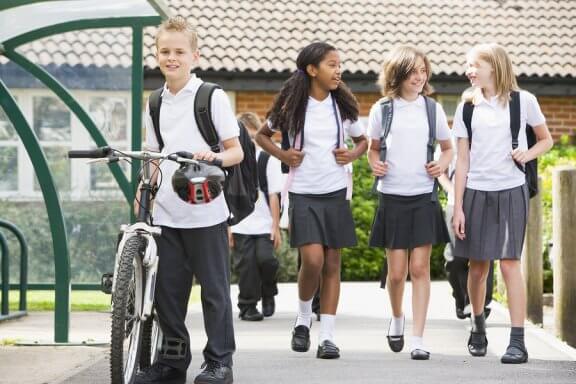 There’s a long-running debate among parents and educational professionals regarding school uniforms. Is it good for children to use specific clothing at school?

If you haven’t come to your own conclusion, check out today’s article. We’ll talk about the advantages and disadvantages of school uniforms.

The advantages of school uniforms

Let’s start with the positive side of school-imposed clothing. School uniforms are synonymous with tradition and belonging, but also with status and prestige.

Some of the advantages of children using school uniforms are the following:

This is one of the most-used words when it comes to defending the idea of school uniforms. This is because school uniforms allow all students to dress in the same way.

There are no arguments or bullying of someone for wearing a jacket that’s “out of style” or from last season.

2. A sense of belonging

One of the reasons why some schools impose school uniforms is to promote a sense of belonging. This is nothing new, but rather an idea that’s been around for centuries.

Belonging to a “home” or an institution through clothing, emblems, or colors is synonymous with pride, prestige and being part of something bigger than ourselves.

For parents whose children use school uniforms, life can be much more practical. This is because they don’t have to worry about going out and buying all sorts of school clothes.

Furthermore, in many cases, younger siblings inherit their older siblings’ uniforms. This allows parents to save a great deal of money and time.

Another benefit that school uniforms bring is that clothing is the same all year round, so there’s no need to go out and buy new clothes each season.

It’s no secret that children have a tendency to get distracted in the classroom, and one of the things that can distract is clothing. If children aren’t comparing their appearance to that of their classmates, then they’ll be able to pay more attention in class.

Discipline is one of the main advantages to school uniforms. Many say that when children are in their uniforms, they behave better… Or at least they think twice before being naughty.

This type of clothing has a connotation based on the following of norms. The same can happen with a police uniform or a sports team uniform.

“School uniforms are synonymous with tradition and belonging, but also with status and prestige.”

The disadvantages of school uniforms

Of course, it’s also important to take a look at the downside of uniforms before making a decision. Among the detractors of school uniforms are the following:

Buying school uniforms is more expensive than using the same clothes for at home and at school. This is especially true when kids need to renew their uniforms halfway through the school year. For many families, the cost of purchasing uniforms can be truly limiting.

Many parents decide not to send their children to schools that impose uniforms because they feel it takes away from their autonomy. The fact that schools “homogenize” the entire student population doesn’t allow children to think for themselves. They aren’t given the opportunity to make decisions about their clothes or be able to enjoy being different.

It’s also worth pointing out that, for some parents, school uniforms are sexist and a thing of the past. Requiring girls to wear skirts and boys to wear pants is a way of not advancing as a society and staying in the past.

Lastly, we can’t leave out the fact that, in some cases, school uniforms can even be dangerous. If your child’s uniform comes with a tie, this can be a hazard during recess play, or at any time, for that matter.

School uniforms also make it evident what school your children go to. Any passerby can identify your children’s school. The same is true when pictures of your children in uniform show up on the internet. In this day and age, you may not want just anyone having access to that information.

Now that you know the advantages and disadvantages of school uniforms, you’ll be able to make the right decision for your family.

In the end, when it comes to values, the clothing your children wear at school, at home, at the gym or at church won’t matter. Values are something that parents need to intentionally teach their children at home, rather than delegating this responsibility to schools.

Take time to think about the type of school you want to send your children to. Most of all, you should base your choice on a school’s values and quality of education.