Children's stories about gratitude are ideal to teach them about the importance of appreciating what we have in life. This way, the world will have more empathetic and respectful human beings. 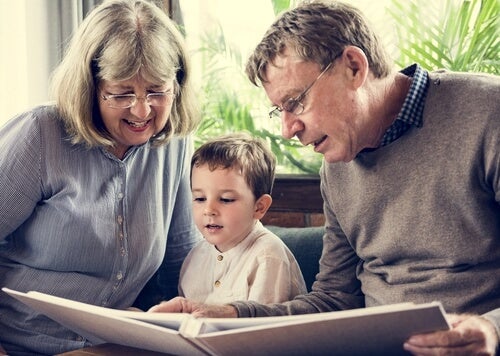 Telling children’s stories about gratitude is a great way to teach them one of the most important values to have in life.

Gratitude is sometimes underestimated and, in recent years, it’s been gradually lost. For that reason, it’s essential to teach children why it’s so important. A great way to do this is to entertain them with children’s stories about gratitude.

This story is about a boy who had everything a boy could ever want, but he didn’t know how to be happy. One day, he was sitting in his backyard when a little girl came up asking him to help her look for the Thankful Coat. The boy was curious because he had never heard of such a thing, and he decided to help her.

Then, perched on a tree, the boy found the Thankful Coat. It was the most beautiful coat he had ever seen. The little girl told him to put it on, the boy did and felt happier than ever. He was very thankful to the girl and that made him feel even better. Then, the girl told him she had to go and take the coat with her. The boy was sad because he didn’t want to feel unhappy again.

The girl told him that the secret to happiness is being thankful. That he could make his own imaginary Thankful Coat, think about all the things he’s thankful for and be happy.

The Magic Window is a beautiful children’s story that encourages gratitude, solidarity, and empathy for others.

This story is about a boy who got so sick he couldn’t go outside to play. Besides being sick, the boy was very sad because he couldn’t play outside with his friends.

One day, the boy was looking out of his window and saw a penguin eating a sandwich. The penguin said “Hello” and left.

The next day, there was a monkey, wearing a diaper, blowing up a balloon. The day after that, there was a pig playing the tambourine. These crazy characters made the boy laugh during those bad days.

When the little boy was good enough to return to school, he told his best friend about these crazy things he had seen that helped him feel better. Talking to his friend, he noticed something strange coming out of his friend’s bag. When he asked his friend about it, he showed him all the costumes he used to cheer him up.

“Gratitude is not only the greatest of virtues, but the parent of all the others.”

The Tale of the Fisherman and the Fish

This story is an adaptation of a Russian tale. It’s not only about gratitude, but it’s also about the dangers of blind ambition. It tells the story of an elderly couple that lived on the shore in a humble cabin.

One day, the man went out fishing and came back with only a little golden fish that, to everyone’s surprise, could speak. The fish asked the man to let it free and, in return, the fish would grant him all of his wishes.

The kind man let the fish go and, in return, the fish thanked him with food for several days. However, the fisherman’s wife wasn’t happy and told the old man to ask for a new house.

The woman wanted to own the fish and make it grant them all of their wishes forever. The fisherman told the fish what his wife wanted. Upon hearing this, the fish got so angry that it took back everything it had given them and disappeared to never be seen again.

In short, children’s stories about gratitude are ideal to teach your little ones about how to be a better person through entertaining tales. It’s very important to reinforce these kinds of values and feelings. This way, they’ll become empathetic and respectful human beings.

Teaching Values to Your Kids Starts at Home
Teaching values is something that must begin at home, and then be re-inforced at school. Read on and discover the importance of leading by example. Read more »
Link copied!
Interesting Articles
Parenting
What Is Platonic Co-Parenting?