Token Economy: A Useful Tool For Changing Your Child's Behavior

Using a token economy is an effective method for educating children. Today we'll tell you more about this tool and how to put it into practice in your home. 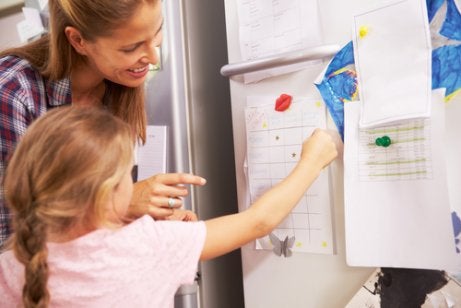 The method is based on a reward system with a psychological foundation of positive reinforcement. When the child’s conduct meets the expectations you’re emphasizing, he or she earns points. The child can later trade those points in for prizes.

How to use a token economy

The objective of a token economy is to stimulate and establish desirable behaviors. It addresses the behaviors that the child has a tendency to resist naturally.

Generally, parents use a token economy to promote interest in certain activities that the child doesn’t find interesting. The technique is also useful for regulating socially inappropriate behaviors. The idea is for the child to associate the target action or behavior with something positive.

How to put a token economy into practice in your home

First of all, you need to plan out the system. You’ll need to prepare some materials, as the system needs to be visible. Children are concrete thinkers by nature and need to see their progress.

Choose and create the tokens. For smaller children, stars, smiley faces and stickers are attractive options. As for older children, you can use vouchers or numbers that you can print on paper, cardboard or plastic.

You’ll also need to create a chart where you’ll record your child’s progress. The chart – divided into columns for each day of the week – will show the tokens that your child has won, lost and cashed in. Hang the chart in a spot where it’s easily visible both for you and your child.

Establish what prize your child will receive once he or she earns a certain amount of tokens. It’s important you decide this beforehand. The reward should be something that will really motivate your child.

For example, it can be a toy that your child wants, a visit to an amusement park, going out to eat, etc. You can also ask your child what he or she thinks the prize should be.

When you set up a token economy, make sure to take your child’s age into consideration. Smaller children need more short-term goals, meaning they can earn prizes for a small amount of tokens.

If earning a prize is too difficult, they easily lose interest. At the same time, older children should have to earn a greater number of tokens in order to receive a prize.

Conditions to consider when designing a token economy

A more realistic goal would be to gradually reduce the frequency of your child’s tantrums. Once your child is better able to manage his or her impulses, then you can talk about eliminating tantrums altogether.

Here are a few more keys for success when using a token economy:

A token economy isn’t meant to last forever. Rather, it’s a temporary measure to obtain a desired change. Once your child reaches the goal, you should slowly modify the system. For example, you can do this by increasing the tokens needed to earn a reward. You can also opt to introduce new goals.