How Children Feel when Their Parents Argue

It doesn't matter how old children are. When their parents argue in front of them, it makes them feel very sad. Not only do they experience a variety of negative emotions, their behavior and the way they see things also changes. 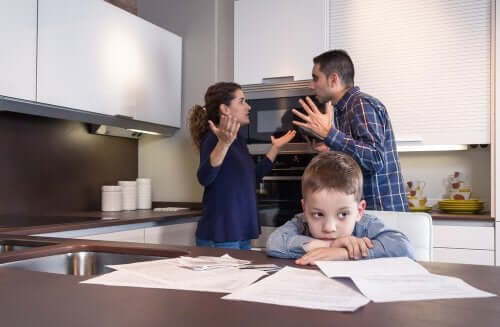 No marriage is exempt from experiencing difficulties. No matter how much two individuals love each other, there will always be subjects they don’t agree on. Therefore, no couple can escape the tribulations that come with this reality. And, if they have children, parental differences can affect them as well. When parents argue in front of their kids, the damage is great.

It’s important for parents to really understand the level of stress these arguments cause to their little ones. That’s why the following article will take a close look at how children feel when their parents argue.

When parents argue, how do their children feel?

If you’ve ever had an argument with your partner, both of you probably felt bad about it. And if you have children, you need to think about how they feel as well. This is because, when parents argue in front of their children, their children experience negative emotions, too.

For example, children are prone to feel like they’re to blame for whatever their parents are arguing about. They think their mom and dad are fighting because of something they did. In fact, some children think their parents would be better if they weren’t around because they wouldn’t have reason to fight.

What’s more, children become extremely afraid that one of their parents could lose control and end up hurting the other. They feel very scared when their parents argue so badly that they say hurtful words to each other.

Parents are the most important figures in a child’s life. And when they see them fighting, it fills them with the fear that they might end up separating. And it hurts them to see their parents so sad.

When parents argue, it affects their children’s behavior

When parents argue in front of their children, this can even come to affect their personality. Seeing their parents fight can make them feel insecure and even become aggressive.

They fail to learn how to resolve their differences with others in a positive way. Rather, they think that by yelling and insulting others, they’ll get their way. Not only with friends, but with their parents and siblings as well.

It’s important to mention that parents don’t need to argue out loud in order to affect their children. Even silent disputes – when parents stop talking to one another – cause children to feel sad.

All of this can produce headaches and stress in children and make them feel unprotected. As a result, they may have a hard time sleeping at night, and may no longer want to go to school, etc.

How children react to parental arguments according to their age

It doesn’t matter how old children are… Children of any age suffer when they see their parents argue. However, depending on their age, they tend to react differently.

At this age, children can’t verbalize their feelings, but they can still demonstrate that they don’t like their parents arguing. They become anxious and irritable, have a hard time sleeping, and perceive the world as an unstable place.

In fact, babies under the age of 6 months can perceive their mother’s tension and physiological changes. For example, an increase in your heart rate or blood pressure.

During this stage, children will try to get their parents’ attention. For example, they’ll start to cry or even yell in an attempt to distract their parents and make them stop arguing.

3 years of age and up

At this age, children start to see themselves as the protectors of their home. They don’t want to go to school because they’re afraid something bad might happen while they’re gone.

They think that if they stay home, their parents won’t argue so much. This explains why they protest so much when it’s time to go to school.

What’s more, in more serious cases, they may regress to attitudes or behaviors that they had previously overcome. For example, they may lose control of their sphincters and, therefore, start to wet the bed.

How to calm children down after an argument?

First of all, parents should make an effort to never argue in front of their kids to begin with. Involving your children in your problems and differences won’t just make them feel sad.

When parents argue, this can cause irreparable trauma in their children’s lives. In fact, they may even have difficulties solving conflicts with their partners when they themselves reach adulthood.

All that being said, sometimes parents make mistakes, and there will be times when we lose control. If that happens, then you must try to calm your children down as soon as possible.

Assure them that they’re not to blame when their parents argue. Help them understand that they don’t need to worry. Remind them that you and your partner love one another and that you love them.

In conclusion, when parents argue, they should avoid doing so in front of their children. Do everything you can to make your children feel loved and show them that you love your partner. That way, they’ll grow up healthy and know how to handle conflicts in a healthy way.

Communication problems among parents can cause misunderstandings that constitute severe problems within a family. The relationship between parents deteriorates and…

Spending a lot of time with your partner, always doing what your partner wants, and losing your personal space... These…

Conflicts
Coming to an Agreement About a Child's Upbringing

Shaken baby syndrome (SBS), also called abusive head trauma (AHT), is considered a clear case of child abuse. In this article, find out more about these situations that can end…