Is "13 Reasons Why" a Good Series for Teenagers?

"13 Reasons Why" is the show that every teen wants to watch. However, is it good for them to see? We're going to analyze this, taking into account its content. 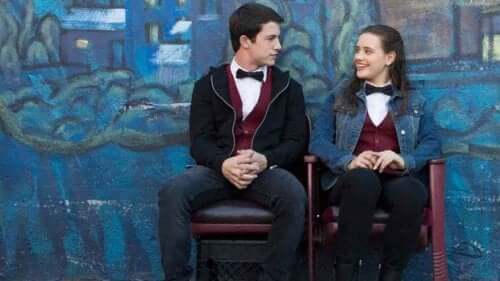 The series 13 Reasons Why has given us lots to talk about in the last few years, and it continues to do so. Of course, we’re talking about its first season, which is based on the book of the same title. The second season has been a way to extend the story, and we’re not going to talk about that season here.

When Netflix premiered 13 Reasons Why in March 2017, it was one of the series that generated the most controversy that year. To this day, teenagers from all over the world are seeing it for the first time. Thus, we can’t ignore the fact that it has a lot of influence.

Argument for 13 Reasons Why

The series tells the story of Hannah Baker, a high school girl who commits suicide and leaves 13 cassette tapes for people she blames for her death. Hannah feels that the way these people acted made her commit suicide.

So, Hannah leaves 13 faces of recorded tapes. On each side, she addresses the protagonist of that reason. Then, she reminds them what happened when they were together and how she felt about it. She gives them instructions to pass the tapes on to the next person. Thus, everyone ends up knowing what the others did or didn’t do.

The co-star is Clay Jensen, a high school boy who knew Hannah and who receives the tapes when it’s his turn. With Clay, we discover what learning all of these things about other people can do to someone.

Knowing certain things causes Clay to fight against injustice. In this way, you find out how others treat him for trying to rebel.

The series and suicide

Suicide is now the leading cause of death for young people between the ages of 10 and 24. This is according to the report from the Ministry of Health, Social Policy and Equality, Clinical Practice Guidelines for the Prevention and Treatment of Suicidal Behavior.

“It’s hard to get to know Hannah in the series, to know the things that happen to her that mean everything while they mean nothing to others. They call it dramatic, exaggerated, and downplay her problems.”

Just by seeing that what happened has no solution makes the series very important. Some say that suicide in this series is revenge. However, it shows that suicide is never the answer because there is no turning back.

If teens are going to watch this series, it’s important that, as teachers or parents, we talk to them about what they’re watching. Talk to them about what’s happening in the show and the consequences. This is much better than trying to stop them from watching it (because they probably will without you knowing) or dismissing it.

In addition, keep in mind that the series isn’t recommended for anyone under age 13. Netflix made a new age classification stating that teenagers 16 and up can watch it with an adult.

However, you should know that younger kids are likely to hear about the series with their friends or on social media. Then, it will probably catch their attention.

Parents: Your role with 13 Reasons Why

Something very interesting that people who work with teens every day notice is that most parents usually don’t know their children at all. In the series, this is very clear. Hannah’s parents and the other kids know almost nothing about their children’s lives. Therefore, they don’t know how to approach them.

If your teenager hasn’t seen the series yet and you think he can start watching it, the best thing to do is watch it first. Then, you can talk to him about the fact that it’s a fictional series and doesn’t always reflect reality.

The series can be a good opportunity to talk with students or teenagers about real situations that they face and that they see on the screen. In fact, you can clarify and solve lots of problems like this.

This series covers topics like bullying (in school and online), minors drinking alcohol, sexual assault, and other important topics for teenagers. With 13 Reasons Why, you can start to naturally talk about adolescent issues that might otherwise seem forced.

Use 13 Reasons Why as a learning tool

One of the things that’s clear with this series is that teachers, parents, psychologists, and other influential adults can use it as a tool. For parents, watching the series with your child will help you talk about the topics that come up.

Therefore, as parents, you’ll find out if your child is going through something similar. Then, you can talk about what he should do, who to go to, and what to do in the future.

As teachers, talking about this is much more natural. Sometimes, it arises spontaneously in class or during passing periods. It’s a good opportunity to see what they think of the show and have a conversation about it.

You probably think that talking to teens about issues in 13 Reasons Why isn’t easy, but it’s a great opportunity. Talking with teens at this stage of their life is so important. Giving them insight on these issues can help a lot.

Fear of the Future During Adolescence
If you notice that your teen is anxious, they may be worried about their future. Read on to discover how to help teens overcome their fear of the future. Read more »
Link copied!
Interesting Articles
Sports and activities
3 Easy and Fun Crafts for Children