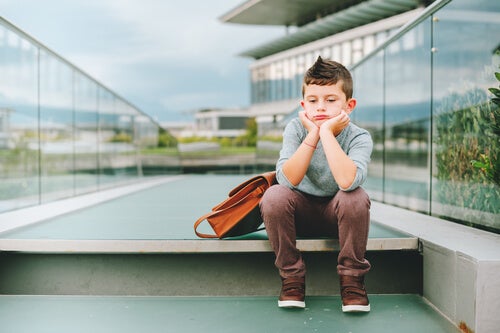 Playing is very healthy for children, as it allows them to explore the world. Through games, kids learn to imitate adults, test alternatives, experiment, solve problems, and develop their cognition and creativity. In fact, when children don’t play, it can have a negative influence on their future.

Nowadays, children have fewer and fewer opportunities to play. Children often have busy schedules, full of activities that take up all their time throughout the day, leaving no room for playtime.

School, sports leagues, language learning, dance, martial arts, music and a host of other activities fill the day-to-day lives of our little ones. They arrive home exhausted and no longer want to play.

Plus, they just don’t have time to play freely. It’s necessary for the family to understand that playing means learning. Playtime is fundamental for a child’s development.

What happens when children don’t play

Creativity is essential for life. It’s the key that allows us to solve problems and handle different situations. The world that children create when they play becomes real to them.

Through games, children’s creativity unfolds. It has been demonstrated that a lack of play in children hinders the ability to come up with original thoughts.

2. Lack of autonomy and independence

As children grow up, they must stop relying entirely on their parents and develop some autonomy.

Play is fundamental for this to happen, because while playing, children make decisions, solve problems and act without an adult telling them what to do. Playing displays autonomy.

Games are training for this independence. The absence of play in children causes insecurity and dependence.

Children who don’t play from a young age are generally shy and insecure. They doubt everything they do and are ashamed of any situation in which they are exposed.

Many times, that shyness is the product of parents who always tell the child what to do. In addition, they reprimand him when things don’t go well.

In these cases, they’re children who aren’t given the space to play freely, to release their energy and potential, or to discover their talents.

These children lack experimentation and the possibility of feeling they can achieve whatever they set out to do.

It’s necessary for the family to understand that playing is learning, and that the time a child spends playing is fundamental for development.

Playing contributes to the development of social skills. Most of the social skills a person needs to succeed in life are acquired through play in childhood.

By playing, children learn to control themselves, to negotiate, to work as a team, to wait and to share. The absence of play in children generates isolated people who are centered on themselves.

Play is essential for the emotional development of children. Imaginary games are fundamental, since children learn a lot about themselves and can project their emotions without limitations.

They imagine themselves overcoming obstacles and fears, and triumphing in situations of risk. So these visualizations become true experiences that enrich them.

Playing makes children feel powerful and independent, and this favors their emotional stability.

On many occasions, a child’s poor behavior is actually a result of not having the chance to play. During games, children release tension. Playing performs a cathartic function, so when children don’t play, tension must be released in other ways.

A voice of alarm arises in psychologists: computer games impose many limits and provide little enrichment. Therefore, although video games can be a complement, the fundamental thing is free play without fixed rules.

Ideally, intersperse moments of individual play with moments shared with other children.