The Benefits of Paintball for Children

Paintball for children is considered one of the safest outdoor sports to practice and one which contributes to a child's logical development through the use of strategies. 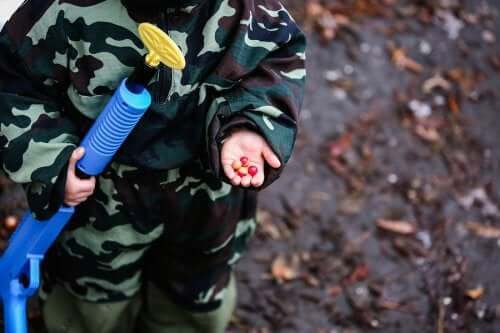 Paintball for children, or SplatMaster, has arisen from the incredible popularity of the National Survival Game, the tactical sport created in the United States. This children’s version follows the same rules used by adult paintball, but adapts to the safety needs of children over eight years old.

Basically, this activity is an exercise in strategy and, at the same time, a hunting game. It started as a game for recreational purposes in 1976, and became a sport in 1983.

Characteristics of paintball for children

Children’s paintball also goes by the name of SplatMaster. It was created as an option for children over eight years old who wanted to practice the hunting, war and strategy games played by their parents. In fact, they were already familiar with many different versions in video games.

The main reason children couldn’t play this sport was that in the adult game the paint capsules left bruises and often hurt the participants when they hit their bodies. All this made it unthinkable for children to participate in this activity, without having something to protect their bodies with.

What they needed to do was to redesign the guns to minimize possible impact injuries and make it possible for children to take part. The adjustments made to ensure paintball could be played by children were:

1. Guns with a spring function

The compressed air or CO2 guns in the adult game were replaced by versions that work with a spring, using flexible metal parts. With this mechanism, the paint capsules would travel at much lower speeds. In fact, you would hardly even notice that the capsule has hit your body (apart from the paint of course!)

Another difference with the guns is their weight, compared to those in the adult game. The guns designed for children weigh just a few ounces. Thanks to this, they don’t feel any discomfort in their arms due to the weight of the weapon. It also makes it easier for them to move around, as they aren’t carrying so much weight.

Unlike adult guns, which have a range of 260 feet, the paint capsules in the children’s version only reach 100 feet.

The second modification introduced was the use of smaller and softer paintballs. Being smaller and softer, in addition to them being fired using a spring mechanism, means there wouldn’t be any impact injuries.

The benefits of paintball for children

Children’s paintball is a sport or physical activity that allows children to enjoy themselves, usually outdoors, with friends or family – even their parents. Practicing this sport lets a child interact, run, create strategies, and release energy. Just the opposite of what happens with video games of a similar nature, at home.

Paintball is played with two teams equipped with guns and paintballs. The team that manages to “eliminate” the greatest number of opponents wins. The thrill of hunting, adventure, being able to run, hide, and pursue an objective, is irresistible to children.

Some of the special benefits of this sport are the following:

As a final recommendation, make sure that you always play this sport with adequate protection for the body and face. Safety rules must be followed with extreme care. Make sure you know the age limits for playing this activity, because it varies from country to country.

Why Strategy Games Are So Beneficial for Children
You might not be too happy about your child playing games on their phone or tablet, but strategy games actually have many different benefits. Read more »
Link copied!
Interesting Articles
Sports and activities
3 Easy and Fun Crafts for Children