6 Types of Smart Toys for Children

Parents often want their children to play in ways that enrich their cognitive and physical development. Smart toys can be a really helpful and beneficial tool for encouraging different kinds of learning in little ones. 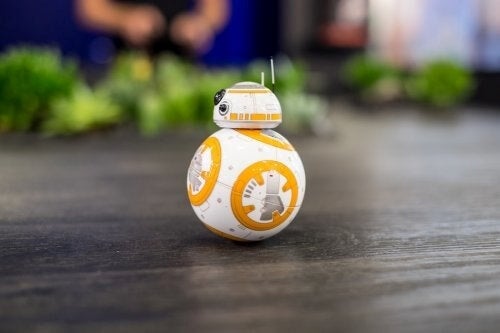 Many parents are concerned about the appropriateness of smart toys and how to introduce technologies to their children. One thing for certain is that most smart toys for children are designed with didactic principles in mind. The robot toys we discuss in this article, for instance, are helpful in developing different aptitudes and abilities because they’re interactive.

In line with the words of Maite Francés from the Spanish Association of Toy Manufacturers, it’s recommended that each child has the opportunity to play with a variety of different toys and apparatuses so they can develop their abilities. Above all, they should also have fun.

More than electronic toys, these kind of toys are now commonly known as “smart toys.” Some can be used with the help of an internet connection. The toys that we discuss below can be a very practical way to contribute to their overall development.

Although there are many Star Wars fans out there, this toy is a true innovation in its own right. It’s a robot that has no age limit. It can turn in any direction because of its floating magnetic head.

In addition, it comes with a complimentary application. It also makes familiar sounds from the movie and it has a large selection of functions like a recording function.

If you’re convinced that your child has already found their calling and they’re fascinated by electricity, this toy is for them. It’s one of the most innovative puzzle-type games. This board game helps children to understand how electricity functions.

The Circuit Maze Board Game possesses more than 50 ways to play, plus it’s didactic and very easy to use. Children have to move the pieces and find the right pattern in order to move on to the next level. It’s wonderful for the child’s learning and it’s the perfect toy for increasing their creativity and sharpening their minds.

Most children love pets. They’re excellent companions and they tend to become best friends before long. Sometimes it’s just not possible for every child to have a real cat or dog. In such cases, this toy is ideal for parents who can’t have pets for their kids for a variety of reasons.

This robot dog imitates the child’s actions. It also has surprising characteristics like the ability to recognize its owners and to learn and perform tricks.

Children tend to learn by example, and more so when their parents are fans of technology. This toy is distinctive from other watches because it has very practical and didactic tools that can help children to widen their capabilities and to have fun at the same time.

In addition to telling the time, the VTech Kidizoom Smart Watch DX possesses other actions like taking pictures, recording videos, and providing playback.

“Technology can benefit children widely if it is directed in the right way.”

The Moff Band is the perfect toy for children who like music, and it’s perfect for stimulating their sense of hearing. This toy emits drum rhythms or music that can help children to expand their imagination.

It comes with a smartphone application that allows access to more sounds for the children to interact with.

Finally, if the child has difficulties with getting up early or with performing different chores during the day, this toy can help them. They can have fun and also establish a routine at the same time. Edwin the Duck is a toy with a Bluetooth function that can connect to mobile phones and help children learn to develop certain skills like reading, taking a shower, and eating on time.

It’s clear that each toy described in the article serves a function and provides some rewarding benefits. In the end, it’s important to emphasize how every girl or boy can increase their abilities by interacting with such toys and to spend some worthwhile time having fun.

Advantages of Children Having a Pet
If you're considering adding an animal to your home, keep reading. There are lots of advantages of children having a pet. Read more »
Link copied!
Interesting Articles
Sports and activities
What Is Unstructured Play and Why Is It Important?

Here are some fun ways to assign roles in children's games, sports or activities. In many cases, before starting to…

Linguistic competence consists of using language appropriately in order to communicate and interact with other people, both orally and in…