The Benefits of Tangrams for Children

In today's article, we want to talk about the benefits of tangrams. This educational tool helps promote creativity and imagination in children and adults alike. 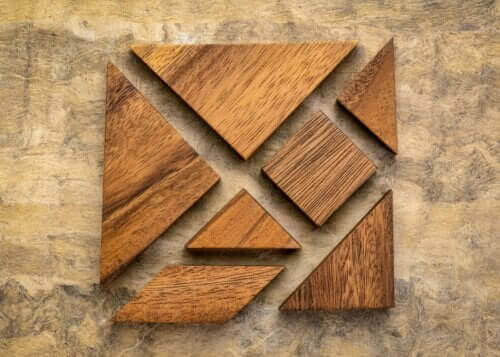 A tangram is an activity that goes back over a thousand years to ancient China. According to experts, it arrived in Europe for the first time in the 19th century. The benefits of tangrams are numerous, including the learning of mathematics, and the development of intellectual capabilities. What’s more, they also boost the development of imagination and creativity.

Tangrams are an excellent educational game that develops creativity and imagination in children and adults alike. They consist of seven geometrical pieces known as tans: Five triangles (three different sizes), a square, and a parallelogram. Together, these several pieces form a square.

By combining these pieces, with the use of a little imagination, you can create infinite geometric figures. All you need is your ingenuity and imagination. The only rule of the game is that you must always use all seven pieces.

If you want an idea of the figures that you can create with a tangram, there are various guides and internet sites. There, you’ll find a wide variety of templates to help you. However, the real magic begins when you start to stimulate your own imagination. With just a little ingenuity and patience, you can create animals, people, objects, letters, and more…

The benefits of tangrams

Tangrams are a great educational resource for the teaching of different mathematical disciplines. At the same time, this activity is great for stimulating creativity and imagination in both children and adults. So, we can say that using tangram contributes to the development and improvement of aspects like:

In the same way, using tangrams:

Benefits of tangrams as a mathematical resource

As we’ve already mentioned, you can use tangrams to teach a variety of mathematical disciplines. For example, geometry, algebra, or the combination of the two.

By manipulating the different pieces, we can compose and decompose a number of geometrical figures. In the same way, we can construct other figures and establish relationships between them. Furthermore, we can learn endless mathematical concepts ranging from lower elementary all the way up to higher education. Some of these concepts are:

“Playing, for a boy or girl, is the possibility of cutting out a piece of the world and manipulating it in order to understand it.”

Children can also trace, color, and cut out the figures they create. In this sense, tangrams also contribute to psychomotor development. Finally, children can use their paper creations to recreate their stories.

So, if you want your own tangram, here’s a link to a video that explains how to make one yourself. That way, you can start enjoying the benefits of tangrams along with your children!

What Is a Child’s Imagination?
If there is something that children excel at, it's their ability to imagine and create their own worlds. In this article, we'll review the different stages of a child's imagination and how to stimulate it. Read more »
Link copied!
Interesting Articles
Sports and activities
3 Easy and Fun Crafts for Children

It's very difficult not to get excited about this magical time of year. However, many children aren't able to get…

Sports and activities
Montessori Boards: Everything You Want to Know

Sports and activities
Craft Ideas to Welcome the Winter Season

Today, we want to suggest a series of crafts to welcome the winter season. Through them, you'll be able to…

Sports and activities
7 Sensory Activities and Crafts for Restless Children