The children's movies coming out in 2019 bring with them all the fun you need to keep your little ones entertained. Take note and get ready to head to the theater! 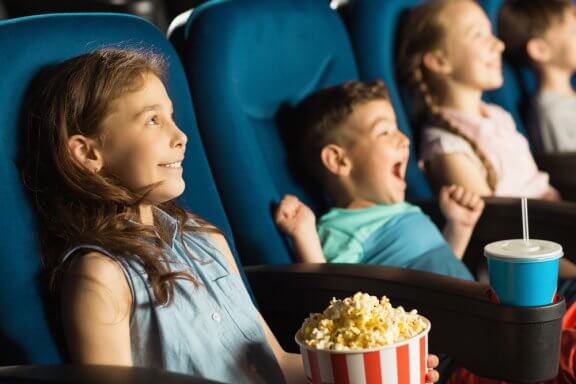 The children’s movies that are coming out in 2019 are full of tremendous adventures that will leave you and your children full of excitement. From new characters to the return of some classics who have already made their way into our hearts, we’ll soon see them all on the big screen.

The continuations of Frozen and Toy Story, and new live action versions of The Lion King, Aladdin and Dumbo are some of the most anticipated films coming out this year.

Besides offering entertainment and cultural enrichment, children’s movies help to develop our imagination. They allow children to understand and learn emotions in order to better express how and what they feel. They also help to deepen family ties, strengthen caring relationship and improve home life.
And now that you know some of the advantages to spending an afternoon watching movies, it’s time to take a closer look at what’s to come. Below, we’ll provide a synopsis of 17 children’s movies coming out this year.

Children’s movies coming out in 2019

The Lego Movie 2: The Second Part

In February of 2014, the original The Lego Movie made its way to the big screen, grossing millions and winning a list of major awards.

Five years later, also in February, the characters from the Warner Bros. Pictures made their return. This time, they find themselves under the threat of a group of outer space invaders.

How to Train Your Dragon: The Hidden World

Also in February, movie theaters hosted the release of the last chapter of the popular animated saga How to Train Your Dragon.

In this third and final instalment of the DreamWorks trilogy, we follow Hiccup in his search for a dragon utopia called “The Hidden World.” The movie also introduced a new character, Light Fury, who catches Toothless’s eye and heart.

This March 8 release from the Marvel Universe’s leading role is a female, a superheroine: Captain Marvel.

The film presents the origins of the story’s main character, Carol Danvers, as a recruit to the elite military team Starforce with whom she’ll find herself in the middle of an intergalactic war between two alien races.

On Mach 15, theaters across the country invited viewers to enjoy Wonder Park, an animated film from Spain. The movie tells the story of a little girl who, while exploring in the woods, discovers the entrance to an amusement park with animals that can talk.

If you like the film, released by Paramount Pictures and Nickelodeon Movies, keep an eye out for the TV series by the same name coming to Nickelodeon.

As we all know, the 1941 original version was an animated cartoon, but the characters make their 2019 comeback in a live action film directed by Tim Burton. This new version about the endearing elephant with gigantic ears is just as touching as the original, if not more so.

This stop motion animated film from Laika and Annapurna Pictures came out on April 12th.

The movie features an investigator of myths, monsters and legends who sets out in search of the Missing Link in the Pacific Northwest. The Missing Link is a mysterious creatures that is half beast and half animal.

The computer animated movie UglyDolls made its debut in theaters on May 3rd. The story reveals a clash between two very different worlds, as the citizens of Uglyville venture out and come to the town of Perfection.

For the first time ever, the dolls from Uglyville struggle with what it means to be different. However, they also come to learn that you don’t have to be perfect – it’s who you truly are that really matters.

A week later, on May 10th, theaters will welcome the release of Pokémon Detective Pikachu, where humans and Pókemons life in a harmonious world.

There, Pikachu joins forces with a young boy named Tim to find his father, a famous detective who has mysteriously disappeared. While they’re searching, they discover a plot that could put their harmonious existence in danger.

On May 24th, Disney will release another long-anticipated live action remake… This time, of the popular 1992 animated movie, Aladdin, based on an Arab folktale from One Thousand and One Nights.

Will Smith will be playing the role of the Genie, and the movie will include new songs, but the original story remains the same. Alan Menkel, composer and co-writer of the movie’s original music, returns for the 2019 version.

The Secret Life of Pets 2

Animal lovers will be especially delighted to find out that the loveable characters from The Secret Life of Pets will also be making their return to the big screen.

While the first movie (2016) focused on what pets do when their owners are away, the 2019 sequel will look at another aspect of pet life: Going to the vet. Mark your calendars – the movie comes out on June 7th.

On June 21st of this year, Woody, Buzz, and all their friends will appear in theaters in their 4th movie, Toy Story 4. 24 years after the release of the saga’s first movie, the toys now find themselves with a new owner, Bonnie.

A series of mishaps while on a road trip with Bonnie’s family lead Woody to become reunited with a love from the past. You and your kids will want to be sure not to miss this movie, as it’s said to be the final Toy Story movie.

The movie will include four songs from the original, including “The Circle of Life” and “Hakuna Matata.” James Earl Jones returns to voice the character of Mufasa, and Beyonce Knowles will take over the voice of Nala.

Dora and the Lost City of Gold

On July 31st, Dora’s curiosity leads her in a quest to solve the mystery behind the ancient Inca City of Gold. Dora finds herself in High School, but her best friend Boots and her cousin Diego are still by her side in the this live action film.

Based on the popular video game, and sequel to the original 2016 Angry Birds movie, Angry Birds 2 comes out on August 16th.

On November 22, this classic toy brand will make its theater debut in an animated film with the same name.

The movie will tell the story of Marla, a young girl who travels to the magical world of Playmobil in search of her brother Charlie. Along the way Marla is joined by a number of heroic new friends.

Mystery shrouds the upcoming release of Frozen 2, six years after the release of the award-winning original. Disney isn’t saying much, but the story’s main characters will be venturing far from Arendale, deep into the woods.

New characters will be joining Anna, Elsa and Kristoff, and you’ll be able to see them in 2D, 3D and IMAX 3D. But you’ll need to be patient – the movie is set for release on November 22.

This stop-motion animated sci-fi comedy is a sequel to the 2015 film, Shaun the Sheep Movie. The movie narrates the story of an alien with superpowers that crashes near the Mossy Bottom Farm.

In the meantime, Shaun takes advantage of the opportunity to experience an extraterrestrial adventure. The sheep and his friends set off on a mission to send the visitor home before a sinister organization captures her.

A Shaun the Sheep Movie: Farmageddon will come out in theaters on December 13th.

Star Wars: Episodio IX – The Rise of the Skywalker

The final 2019 movie on our list is the ninth and final instalment of the Stars Wars film franchise. And while children are sure to enjoy the film, so are their parents and grandparents, who also grew up enjoying this epic saga. The movie, scheduled for release on December 20th, is sure to go down in history.

As you can see, 2019 is jam-packed with all sorts of children’s movies that you and your family can enjoy. Which film are your little ones most excited about?

7 Disney Movies to See in 2019
From feline kings to ice yielding queens... From defenders of the earth to defenders of the galaxy, 2019 is packed with Disney movies for every crowd. Read more »
Link copied!
Interesting Articles
Sports and activities
3 Easy and Fun Crafts for Children