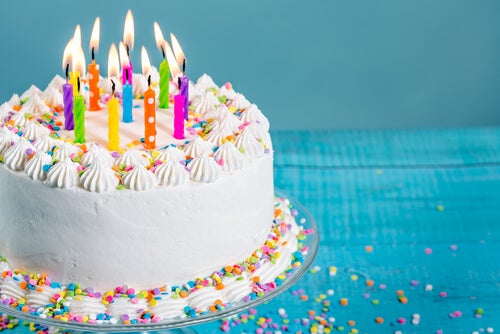 Discover some historical facts about birthdays that may surprise you!

We know very little about the historical origin of birthdays. They’re celebrated throughout the world, even though sometimes people might not be too honest about how old they actually are!

A birthday is, fundamentally, the celebration of a special event. That event is, of course, a person’s date of birth. It’s usually celebrated with a party or something similar that brings together friends and loved ones.

We’ve compiled some fun historical facts about birthdays through the ages for you, and we’re sure you’ll enjoy them, and find some surprises along the way!

Some interesting historical facts about birthdays

The origin of the birthday celebration belongs to a pagan celebration before the emergence of Christianity. Many of the customs associated with this celebration have their origin in magical or religious practices.

The lighting of candles around a cake was originally thought to protect people against evil spirits. In addition to that, they attempted to guarantee the welfare of the person for the following year.

The influence of the stars

This practice, initially pagan, has direct links to astrology. It was the astrologers who, on inventing calendars, were able to calculate dates of birth.

This calculation was initially only for the rulers. That is, for kings or members of the nobility or the people of importance in a specific place.

They did this because these people’s decisions and what happened to them throughout the course of their lives had an effect on the whole of society. In this sense, calendars and horoscopes went hand in hand.

In ancient Greece, men who were celebrating their birthday on the same day all gathered together. This was a private celebration in exclusive clubs.

The Greeks believed in the existence of a protective spirit (which they named daemon). This character supposedly appeared on the day a person was born, with a mission to accompany him for the rest of his life.

As these practices had magical origins, Christianity found it difficult to accept the idea of a birthday celebration. The Christians weren’t only indifferent to them, but were totally against even celebrating them with a party.

Christianity, in its beginnings, opposed the celebration of any of these practices. Whether they were pagan or magical/religious, they believed the practices would question the belief of the existence of only one God. Or, if not, that people would ascribe magical powers to the elements of nature such as the stars.

Later, with the consolidation of the Catholic religion in Rome, this tradition was no longer seen as bad. We should bear in mind that Catholicism adopted several pagan traditions. They didn’t celebrate birthdays as such, but All Saints’ Day was commemorated.

One of the historical facts about birthdays relates to the universalization of this celebration. In Rome, when Christianity became the dominant religion, there was a need to assign a date for the birth of Jesus, the Savior.

The Bible only mentions two birthdays. The first is King Herod’s, who, among other things, commanded John the Baptist’s head to be brought to him on the day he was celebrating his birthday.

The other birthday that the Bible mentions is Pharaoh’s. To celebrate it, he had the idea of executing the head of the bakery.

The most famous birthday in the world is that of Jesus, on December 25. The Church chose that date, not for historical accuracy, but to replace a pagan celebration.

The date in question was a celebration of the rebirth of the sun, which coincided with the winter solstice in the northern hemisphere.

There are some birthday celebrations that last for up to 9 days. Others are celebrated collectively during the lunar new year, as in Vietnam, for example.

In turn, many Muslims don’t celebrate birthdays due to a tradition relating to the Prophet Muhammad.

There are other traditions surrounding birthdays which weren’t always accepted by society.

These days, birthday celebrations seek to celebrate life and show love to the honoree. In the West we usually celebrate them with a cake, candles and in the company of those closest to us, who all meet together to give their best wishes to the one who is celebrating the end of one year of their life and the start of another.