Lilo and Stitch: The Value of Family

If you want your children to learn a life lesson about family while having fun, Lilo & Stitch is perfect. The story of friendship between Lilo and Stitch should be one of your top choices. 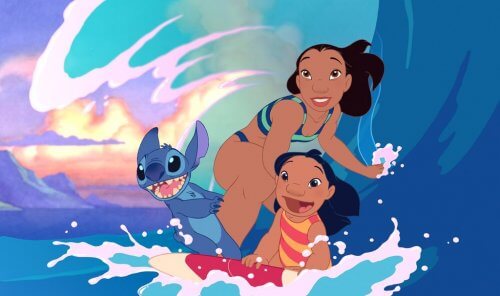 Watching movies is a great way to entertain little ones. It keeps them distracted and provides a fun way to learn. Movies act as communicative bridges between children and adults. Most Disney films are based on ancient legends, but also they’re coming out with more original stories. One of them is Lilo and Stitch.

This movie was a huge deal when it first came out. It takes place in Hawaii, plays Elvis Presley songs in the background, and has endearing characters. It even received an Oscar nomination for Best Animated Film in 2002.

The movie was so successful that they even came out with a children’s series.

The fundamental values that this movie emphasizes are the importance of family, self-esteem and value. If you want your children to learn life lessons while having fun, the story of friendship between Lilo and Stitch should be one of your top contenders.

Lilo and Stitch: Family Is the Most Important Thing

Lilo is a Hawaiian girl who is addicted to Elvis music. Her parents died in a car accident. All she has is her sister, Nany, who works long hours to support them both.

Meanwhile, Lilo has a rebellious spirit and always ends up in trouble, often hurting her sister.

Despite her sympathy and joy, she doesn’t have many friends. She feels very lonely. One day, she asks God to send her an angel for her to play with. Coincidentally, at that moment, an alien ship lands on earth. This is the ship that the alien experiment 626 is on.

Lilo confuses him with a dog and adopts him, which will lead her to have many adventures. At the same time, Stitch’s creator, Jumba and agent Pleakley arrive on the island to try to take him back to space.

To do this, they need to disguise themselves as human beings. Specifically, they pretend to be a funny married couple.

Stitch is very aggressive and breaks everything he touches. Living with Lilo is complicated in the beginning, but little by little, he discovers that family is better than destroying the world.

“Ohana means family. Family means nobody gets left behind or forgotten.”

Strengths of Lilo and Stitch

If there is a story worth telling, it’s this one. There aren’t any princesses, dragons, or far off lands, much less fairy godmothers that help save the day. Nany and Lilo are two normal girls, and life hit them hard.

Nany fears that the police will take Lilo away from her, and works lots of hours to look good for child protective services. Meanwhile, Lilo feels isolated since the other girls in her class make fun of her. The sisters argue, shout and say hurtful things, but they always make up.

They know that they’re family, and that family always supports each other, no matter what. In the same way, Stitch changes his behavior to fit in with them.

Kindness, gratitude, and courage are the main qualities in this movie.

Everyone Deserves a Second Chance

This film also leaves us with a very valuable lesson: we can all change. People are the way they are due to things they’ve lived through. Characters change from their experiences, and they grow.

Perhaps someone very unpleasant that you met years ago isn’t anymore. Maybe that nice friend from school is meaner now. Either way, you need to put yourself in their shoes before you judge them.

Those who really want to change need to start with how they act and see the world. Our choices depend on ourselves and our wisdom to choose what’s best.

We shouldn’t be afraid about it. There will always be people around us willing to give us a second chance and reach out to us.

Link copied!
Interesting Articles
Sports and activities
What Is Unstructured Play and Why Is It Important?

Here are some fun ways to assign roles in children's games, sports or activities. In many cases, before starting to…