Playing with Your Children Makes Them More Intelligent 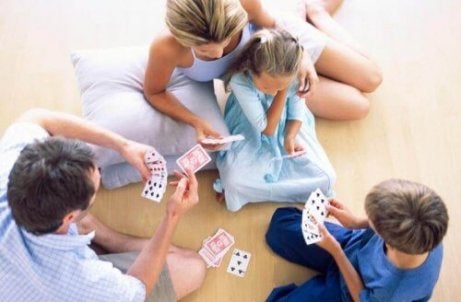 In this article we’ll talk about the importance of playing with your children and spending quality time with them.

Playing is the most important activity for your children, and it can even make them more intelligent. Your children play not only to have fun and entertain themselves, but also to learn.

Playing isn’t a waste of time. Rather, it’s a fundamental activity for your little ones.

A child that plays constantly and stays active will be healthier all around – physically, mentally and emotionally.

A new study gives us one more excuse for us mothers and fathers to continue playing with the younger members of the family. The study took place in Pakistan at the University of Aga Khan in the city of Karachi.

Data from the recent investigation shows that certain types of play stimulate children. As a result, they are much more intelligent in the future.

The research focused on a group of 1,302 4-year-old children that received oral, cognitive, and motor stimulation during their play times.

The group that received stimulation managed to develop a higher intelligence quotient (IQ) than those children who did not.

Stimulation through play also significantly increased their pre-academic capacities. At the same time, their executive behavior and ability to relate to others also reached higher levels.

Playing with someone else is important for increasing intelligence

When we say that children need to play, we’re not saying they should play alone. On the contrary, playing with others is crucial.

Children that sit down and play with their parents and siblings also develop a very important emotional capacity. This emotional intelligence will help them relate to others in the future.

In fact, the study we mentioned above demonstrated a significant difference in the behavior and cognitive ability of children who played with their parents from a young age.

One of the most striking details about the study is that the participating children came from low-income families. Stimulating them through games and play didn’t require the use of elaborate or expensive toys.

In some cases, the children played with kitchen utensils. Some of the parents improvized toys with other household objects. What matters is that the children spent time having fun together with their loved ones.

“Emotional intelligence begins to develop in the earliest years. All the small exchanges children have with their parents, teachers, and with each other carry emotional messages.”

Parents can also benefit from playing with their children

Children aren’t the only ones that have fun and develop higher cognitive and social abilities when they play. Parents also receive the benefits of sitting down and playing with their children.

Playing with your kids doesn’t just help you better connect with them. According to the study, playing also helps parents develop a higher ability to care for their children. Furthermore, it improves their capacity to communicate with their little ones.

Playing: The motor behind the health and development of children

Normally, when children are sick, they stop playing. This is because playing demands an active attitude rather than a passive one.

In order to play games, children must exert themselves physically, emotionally and intellectually.

Therefore, play is the best indication of a child’s mood and health. Playing is just as important for children as food and sleep. If your child plays, sleeps and eats enough, this is a clear indication of good health.

Through play, your children learn to relate to the world around them. They develop their imagination, become emotionally involved, imitate other children, move their muscles and joints, etc.

Playing is the best form of entertainment for intelligence, the development of abilities, emotions and psychical activity.

When children play, they exercise their growing bodies. They learn to control and coordinate their muscles, joints and movements. Furthermore, play stimulates their intelligence and emotions.

Therefore, play has to be entertaining and attractive in order for a child to want to get involved.

While playing, your children get to know themselves and the world around them. They learn to be imaginative, pretending to be different people or animals.

They act out different scenes – both real-life situations as well as imaginary ones. And playing with others also teaches them about sharing. All of this allows them to approach the world of adults.

Playing also helps children become more independent. Independence, of course, is the final objective of education. The goal is for your children to become independent, balanced adults who are able to relate to the world around them.

Very often, the toy industry has a great influence on parents, leading them to look for “educational toys.” Unfortunately, this limits your child’s play.

Give your children the opportunity to learn about the real world, about themselves and their surroundings. This is just as important, if not more so.

Even if it’s just half an hour a day, dedicate that half hour to playing with your child. It’s not a time for watching cartoons.

Rather, use these priceless moments to forget about all your burdens and responsibilities. Strengthen your relationship with your child, laughing and being silly as you play together.