The 10th Week of Your Pregnancy 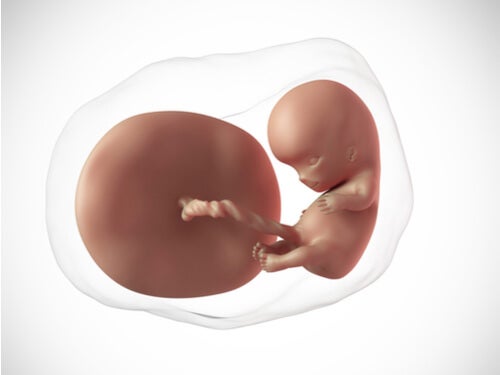 In the 10th week of pregnancy the mother should start to notice abdominal growth. This is because the baby is already 3 to 4 centimeters in length.

It is normal for the mother to gain between 1 and 1.5 kilos during this stage of pregnancy. If you’re going to have twins, you may put on up to 2 kilograms.

By this week, all the future baby’s organs are already formed. However, each of these organs won’t function correctly for a few weeks yet.

Embryo formation during the 10th week of pregnancy

During the 10th week of pregnancy all the sexual organs of the fetus begin to develop. However, it is still too early to perform an ultrasound, and so you’ll have to wait to find out their sex.

The placenta also begins to function, and this will be the baby’s support until the end of the pregnancy. The placenta is connected to the fetus, through the already formed umbilical cord.

At this time the head of the fetus is a little separated from the chest, which means the neck and jaw can start to form. The palate also starts to form, as does the tongue and the future “first teeth” which are found inside the gums.

In addition, the face of the fetus begins to look more rounded. Their hands and feet are more formed by now, and they begin to acquire movement in each of their little fingers.

Internally, the fetus’s nervous system begins to connect with the rest of their body. The intestines also start to form, and start as a small growth attached to the umbilical cord.

The bones will now start to lose their cartilage form, and their transformation and hardening will begin.

The calcification of the skull is especially important at this stage. In addition, muscles and joints are still developing towards their full capacity.

The time is now approaching when an ultrasound will be able to be done. In it you’ll be able to clearly visualize the arms and legs of the fetus. However, the hands and feet are still too small to be able to differentiate.

It’s possible to hear the baby’s heart through the ultrasound. You’ll notice that the heartbeat is very fast, between 120 or 160 beats per minute. This is because blood is pumping at a very high rate throughout his body.

It will also be possible to differentiate the circulatory system of the mother from that of the fetus.

If any abnormality should be observed during the ultrasound, then the mother may have a chorionic biopsy. This diagnostic test consists of taking hairs from the mother’s uterus to analyze them.

With this test you’ll be able to find out if the baby has either a hereditary genetic disease or one related to their sex. This test is also recommended for mothers who have already had children born with serious conditions, such as Down syndrome.

Despite the risk of having a miscarriage being fairly low (between 1 and 2%), it is advisable that the mother should rest after taking a test like this.

This must be a minimum of 48 hours, just to be completely safe. It is a test that is usually carried out without any complications, neither for the mother nor for the fetus.

How does your body change?

It is normal for the mother to start gaining weight quickly after the 10th week of pregnancy. In addition, the uterus has grown and occupies almost the entire pelvis, and so you may be able to feel it by touching the pubis area.

The baby will start to make sharp movements in the uterus. However, the mother is still unlikely to feel these movements. This is mainly due to the muscles and joints still not being sufficiently formed.

The “kicks” that mothers usually feel will start to appear in the third month of pregnancy.

Finally, it is recommended that the mother should have adequate control of her diet, as her weight will increase easily.

However, this doesn’t mean that she has to follow a strict diet, just a balanced one. She should consult with her obstetrician and follow their advice.

However, experts recommend that expectant mothers don’t resist their “cravings” as this may affect her emotionally given her “delicate” condition due to hormonal changes.