The 12th Week of Pregnancy

At the 12th week of pregnancy, the fetus becomes more active and organs begin to develop, find their place and even function. 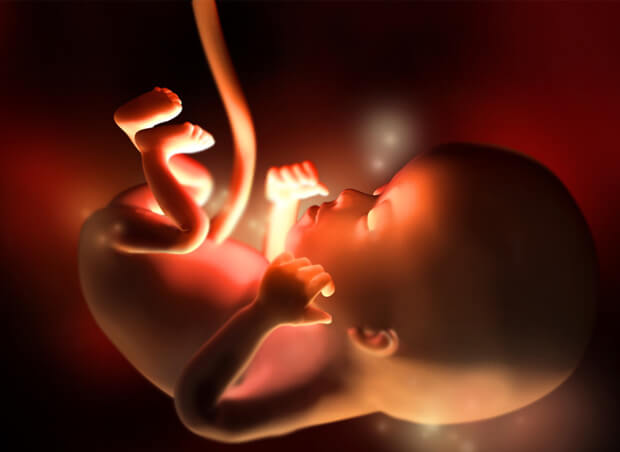 At the 12th week of pregnancy, the last one of the first trimester, your baby’s height can be between 5 and 6 centimeters, and weight between 8 and 14 grams. The heart beats very strong, at 160 beats per minute, and his or her movements begin to increase, though they still remain imperceptible for you.

Your baby’s size is about that of a plum or a passion fruit at this point of gestation. In fact, between the last week and the current one, he or she has grown about 15%. Extremities are already formed, organs begin to mature quickly and even the intestines, connected until now to the base of the umbilical cord, move to the abdominal cavity.

The head, similarly, acquires a rounded shape. The mouth can open and close and the ears are where they belong. The nails begin to form, as do the vocal cords. During the 12th week of pregnancy, the kidneys begin to produce small amounts of urine, and even the first signs of hair appear on the body.

Although sex cannot be determined yet with an ultrasound, the genitalia are in full development at this stage. By this time the baby is also able to yawn, hiccup and swallow. It’s now when the wonders of nature truly start to become apparent to us, as we see the things our developing child is able to do.

In addition, this is usually a decisive time to tell everyone that you’re expecting. If you haven’t done so yet, it won’t be long before they notice!

Symptoms of the mother during the 12th week of pregnancy

Ultrasound in week 12 of pregnancy

As a turning point of the first trimester, the 12th week can be an ideal time for the first ultrasound. This way we can verify that the organs are developing correctly. We can also check the baby’s size and weight, as well as the presence of the nuchal translucency, the liquid all fetuses have in the nape.

“This is a trascendental time, given that specialists claim that between 60 and 70% of malformations the fetus might present can already be detected at this point.”

On the other hand, the width of the fetus’s nape is measured, a figure that is part of the first trimester check-up, allowing us to detect the risk of an anomaly in the number of chromosomes (know as aneuploidy), especially trisomy 21 or Down syndrome. This is possible thanks to the relationship between these data and other studies, including:

The exciting part, apart from noticing the fetus’s first activity, is the estimation of the due date for childbirth. In any case, and with no intention of raining on your parade, the date is accurate only 5% of times.

Some advice for the mother

During the 12th week of pregnancy, you should abide by some suggested rules for this stage. Firstly, you should follow a healthy diet, as this directly affects both the mother’s and the fetus’s health. Secondly, oral hygiene is also crucial.

Other recommendations deal with less personal issues, which are nevertheless important. With that in mind, it’s important to schedule a budget for the next baby expenses. We shouldn’t forget other matters either, such as always wearing an adapted seatbelt to avoid any damages to the fetus, should we have an accident.