How Alcohol Can Affect Your Baby During Pregnancy 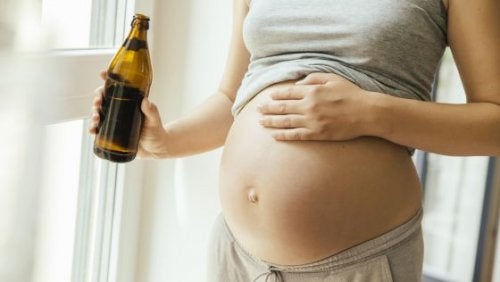 No matter how you look at it, alcohol is a drug. Therefore, it must be consumed in moderation or even definitively eliminated. If you’re pregnant, it’s especially dangerous. But do you know why? Take note, because we are about to tell you how alcohol can affect your baby during pregnancy.

This is how alcohol can affect your baby during pregnancy

Alcohol directly affects the fetus. The alcohol that the mother ingests penetrates the baby’s body through the bloodstream.

The mother’s body can eliminate the alcohol she ingests, but this isn’t the case for the baby. The baby’s organs are still being formed and aren’t prepared to perform these tasks.

The presence of alcohol in your baby’s body during pregnancy can have fatal consequences. It can also cause deficiencies and malformations, as well as fetal alcohol syndrome. This syndrome is responsible for at least 20% of malformations in fetuses.

Two phases are observed in children who have developmental deficits due to fetal alcohol syndrome: one in the prenatal stage and one in the postnatal stage.

Babies affected by fetal alcohol syndrome usually have a much lower weight than they should.

It’s essential to observe the baby’s brain evolution. We must bear in mind that they’re born with a very small cranial perimeter. This factor comes into play when the child’s functional capabilities develop. In many cases, it could lead to mental deficiencies.

With regard to the damage that occurs in the nervous system, it damages the central nervous system above all. It’s therefore common for these babies to end up suffering a delay in their development. This delay can result in minor abnormalities or severe mental retardation.

It’s also common for this to degenerate into behavioral problems and other disorders. Among them, they might include irritability, shaking, hyperactivity, anxiety and alterations in motor functions.

It can also lead to malformations, as we’ve said. These malformations may be present in the heart, the eyes or even in the kidneys. They could also translate to deformities in the extremities.

Alcohol during pregnancy is strictly prohibited

If you’re wondering how alcohol can affect your baby during pregnancy and whether or not you can drink while pregnant, and if so how much, take note.

The fact is that the various studies that have been conducted do not yield clear data. While it’s true that a very early glass may not have a clear impact on the fetus, it’s best not to drink.

These problems can appear in the baby even if the mother regularly drinks a small amount of alcohol. Therefore, the only possible solution is to avoid alcohol altogether.

If you haven’t yet gotten pregnant but you’re trying, your partner should also moderate his alcohol intake. The reason? According to recent studies, if the father consumes a large amount of alcohol on a regular basis, it could have consequences.

If he consumes alcohol prior to the baby’s conception, the risks of the future child suffering from leukemia increase. This is because alcohol causes mutations in chromosomes. All this causes an alteration in a protein that is associated with the onset of leukemia.

In fact, it also occurs with tobacco. It’s therefore important that couples who want to have a child refrain from drinking alcohol and smoking tobacco.

So now you know how alcohol can affect your baby during pregnancy. Regular consumption can even affect the baby if you’re trying to get pregnant.

Leading a life that is as healthy as possible won’t only help you conceive, but also have a healthy baby.