What Do Babies Feel in the Womb when Mothers Cough?

Flu during pregnancy? Have you ever wondered if coughing or sneezing can bother your baby in the womb? In this article we'll clear up any concerns you might have. 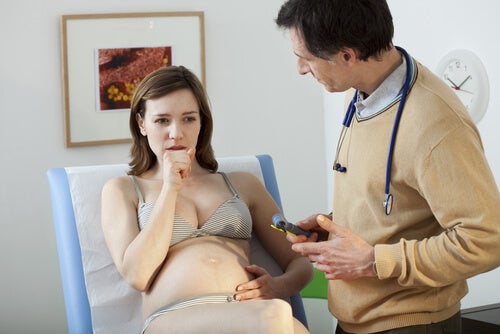 Pregnant women tend to worry about any detail that could harm their baby. That’s why it’s normal to wonder what babies feel in the womb when mothers cough.

Spoiler alert: it’s nothing to worry about.

It’s normal for mothers to go out of their way to avoid any sort of complication for their children. This is especially true before the baby is born.

When they get sick, many women feel uncomfortable coughing, sneezing or even vomiting.

Mothers worry about what their baby feels in the womb. When they feel bad and their body feels sensitive to any external stimuli, they’re afraid they might transmit that feeling to their child.

Below we’ll look at this issue in depth in order to give you some peace of mind.

Changes in the immune system during pregnancy

Several changes occur in a woman’s body during pregnancy. These changes extend to the woman’s immune system.

Now, their immune system’s main mission is to protect the baby from all sorts of threats. That’s why the mother may be more exposed to certain germs and viruses.

If you feel that you get sick more frequently when you’re pregnant, don’t worry, it’s normal.

However, this doesn’t mean you shouldn’t get a checkup with your doctor. On the contrary, you should consult them quickly in order to avoid major complications.

During pregnancy you should be careful with medications.

Not all medications are suitable during pregnancy. You shouldn’t use any medication that hasn’t been indicated by your doctor.

“Not knowing what the baby feels in the womb when the mother coughs creates uneasiness for the future parents.”

Some tips to help you feel better while sick:

What do babies feel in the womb when mothers cough?

Now that we’ve gone over the reasons why mothers get sick during pregnancy, it’s time to focus on the little one.

What do babies experience in the womb when their mothers have these symptoms? Does it have any negative effect on their development?

Like everything that occurs during their stay in the womb, the vibrations that babies feel when mothers cough is something they’re well prepared for.

Many mothers worry about inflicting “pain” on their children when they cough.

Don’t worry, this isn’t a problem for the baby nor for its health.

As we previously stated, they feel a light vibration and in response to that, they move a little. They don’t move out of pain or fear, it’s simply a reflex caused by their environment.

“The vibrations that babies feel when their mothers cough is something they’re well prepared for.”

After finding out what babies feel in the womb while mothers cough, the next question arises: what happens when mothers sneeze abruptly?

Precisely what happens is that “their space” shrinks a little and then expands again immediately. This poses no risk for the child so you don’t have to worry.

Nature is wise and both mother and child are perfectly prepared and conditioned for the nine months they spend together.

Factors that can affect the fetus during pregnancy

Apart from sneezing and coughing, there are some behaviors and sensations that can affect the baby while inside the womb.

A few examples are: stress, sadness and worry. They cause hormonal changes which in turn release catecholamines that can cause premature birth or low birth weight.

After the 12th week they’ll also be able to taste the food you eat. Later on they’ll develop the sense of touch and will able to feel a bit of inoffensive pressure if you have an orgasm during sex.

In conclusion, a mother doesn’t cause any harm to her child while sneezing or coughing.

So don’t worry and never try to avoid coughing.

All you have to do is take care of your health. That’s the best care you can give your child in the womb.