What Changes Occur in the Brain During Pregnancy?

During pregnancy, the brain experiences important changes. These can actually help guide you, even if you feel insecure about everything that motherhood entails. 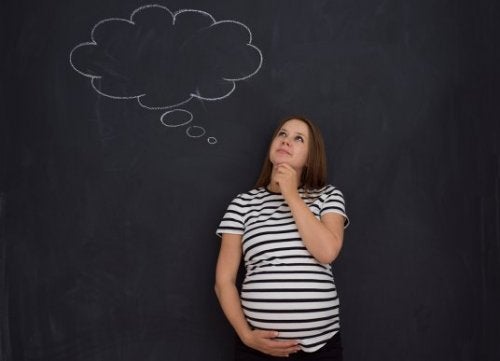 Women go through endless changes and emotions in the course of their lives thanks to hormones. One of the most common transformations occurs in the brain during pregnancy.

These changes may explain the alteration in the woman’s focus and why she may become a bit confused. Below, find out what changes occur in the brain during pregnancy and how you should feel about them.

The brain during pregnancy: important changes

A large number of women say that after pregnancy, they started to forget some things and were more sensitive to their peers’ emotions. These alterations occur because the woman focuses on only one thing: her baby.

She may experience greater concentration on certain issues while neglecting others. Among the most important changes, we can highlight:

Gray matter undergoes the most important change in the brain during pregnancy. It’s known as neural pruning, since this part decreases or shrinks.

This process allows greater sensitivity to suffering. Apparently, this condition results in the woman having optimized senses for the task of caring for a baby.

Some specialists attribute mothers’ abilities to translate what other people feel to this brain change. This empathy is particularly special toward children, so it’s understandable that it’s mothers who detect their needs.

Increase in size of neurons

Another change experienced by the brain during pregnancy occurs in the medial preoptic area of the hypothalamus. Due to this condition, there is an increase in the size of neurons, which makes them more sensitive and active.

One of the consequences is an aggravation of senses such as smell and taste. That’s why pregnant women or those who have recently given birth tend to be more sensitive to smells and can taste more flavors. Many of these smells and tastes even seem disgusting.

Another consequence includes an intense feeling of well-being. This sensitivity makes the mother fall in love with her baby just by feeling him or her in her belly, and even more so at birth.

Likewise, it’s this change in the brain that causes physical discomfort in the mother when she separates herself from her baby in the first months after birth.

Reduction of the cerebral amygdala

During pregnancy, the brain is subjected to hormonal changes and the presence of substances caused by pregnancy and lactation. As a result, the amygdala becomes smaller. This area is responsible for fear and the decisions made in response to fear.

For this reason, many mothers develop a brain less prone to fear. This ability allows the woman to act in different ways to preserve her child’s life.

“The most important change in the brain during pregnancy is neural pruning. This process creates greater sensitivity to suffering.”

Influences the synaptic function of the hippocampus

An increase in spatial memory and learning represents one of the causes of forgetfulness in pregnant women.

Although these transformations begin in pregnancy, they increase with delivery, since the brain adapts to constantly monitor the new member of the household. Then, it’s necessary to learn to take care of the baby and perform other tasks quickly.

Pregnancy brain: is it possible?

The brain during pregnancy reacts to different hormones, mainly oxytocin and prolactin. Amazingly, both cause transformations that remain during the first months after delivery.

There are even some structures that remain for years. These positive changes allow the mother to get by on less sleep in the first year of her child’s life, as well as understand the nonverbal language characteristic of babies.

In conclusion, the brain during pregnancy is subjected to various changes that guide the woman to a happy motherhood. These alterations are necessary and part of the beauty experienced as a mother.

Therefore, if you worry about what you’ll feel like when you have your little one, don’t worry: your mind is ready.