What Are the Causes Behind Abdominal Pain During Pregnancy 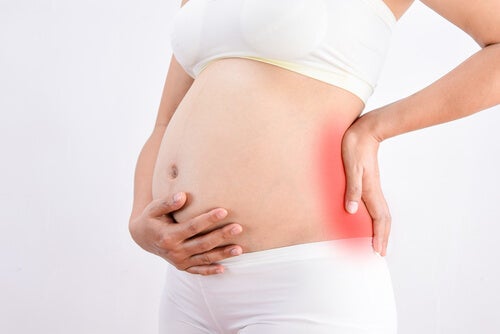 Abdominal pain during pregnancy isn’t necessarily an indication that something is wrong. However, it’s important to take into account certain details in regards to this pain.

During pregnancy, a woman’s body undergoes a number of changes. The most notable change is that of our growing belly.

Our body’s become more sensitive to certain stimuli, resulting in nausea and morning sickness. Another common symptom is cramping in the abdominal region.

They are especially frequent during the beginning of gestation, just as contractions are common during the final months. As long as the abdominal pain is sporadic and mild, there’s no reason to worry.

In general, mild abdominal cramping is a result of gas or constipation caused by certain gestational hormones that slow digestion. It may also be the result of the stretching of the ligaments that support the uterus.

This can occur sometimes if you’ve been doing sports or been making sudden movements.

When should I be concerned about abdominal pain during pregnancy?

You may be dealing with a virus or infection, so you should seek medical attention right away.

There are several serious problems that can also produce abdominal pain during gestation. Some of them, like  appendicitis or peritonitus, aren’t directly related to pregnancy.

When the insemination of an ovule occurs outside of the uterus – generally in the Fallopian tubes – this result is ectopic pregnancy.

The symptoms of ectopic pregnancy include major hemorrhages, pain in the abdomen and pelvis, and discomfort in the shoulders.

Shoulder discomfort is due to an accumulation of blood in the diaphragm, which can occur if one of the Fallopian tubes is damaged.

With very rare exceptions, a fetus that develops outside of the uterus is unable to survive. Treatment usually involves the termination of the pregnancy –  either through surgery or the administration of methotrexate.

Miscarriage is a very frequent cause of strong abdominal pain during pregnancy. It usually occurs between week 13 and week 20, and involves major hemorrhaging. It can also include back cramping and a sudden loss of gestational symptoms.

This is a very sad situation for the expectant mother, but it’s important to remember that nature is wise. If the embryo isn’t prepared to survive, then it’s best for the body to eliminate it.

Keep in mind that future pregnancies can be more successful.

Placental abruption is an uncommon but serious gestational complication. It occurs when the placenta separates partially or completely from the uterus prior to birth.

In some cases, abruption involves a major loss of blood, which makes the situation even more dangerous.

The majority of cases of placental abruption occur in the third trimester and can be an indication of premature birth.

Preeclampsia is a condition that is diagnosed thanks to high arterial pressure and the presence of proteins in urine. The most serious cases can produce loss of vision as well as severe headache.

An inability to breathe correctly and swelling of the body are also common symptoms of preeclampsia. Another possible sign of preeclampsia is sudden, inexplicable weight gain, which is produced by liquid retention.

If you notice any of these symptoms, then you should seek medical attention immediately. Untreated preeclampsia can cause damage to the brain, liver, kidneys and to the fetus itself.

Premature birth is any birth that occurs before the 37th week of gestation. It always involves contractions, which are an indication that the baby is on the way. Pelvic pressure increases, as well as the secretion of discharge or liquid to the vagina.

This is something that was unimaginable half a century ago, and is largely thanks to the use of incubators.

If you find yourself in one of the above situations, the most important thing to do is remain calm, but see a medical professional immediately. The calmer you are, the easier things will be and the milder the pain will feel.