Cesarean Delivery: 3 Things You Should Know 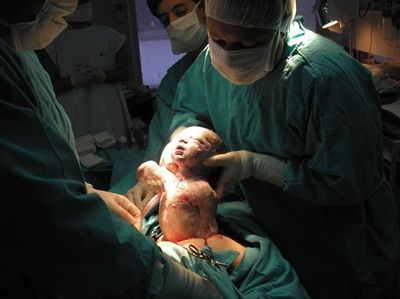 You are reaching the end of your pregnancy and a question begins to be frequently asked in all gatherings of friends and family: “Natural birth or cesarean delivery?”

You might answer by explaining what you’ve been discussing with your gynecologist, but you know that does not necessarily mean that it will be strictly respected.

Even in your head, there is a myriad of doubts since one of the immediate and inevitable debates after that question are the pros and cons of both natural birth and cesarean delivery, myths included, where you will even rethink your preference.

For that reason, in this article of You Are Mom we’ll tell you in detail what cesarean delivery consists of, how it arises and what further care it requires. Pay attention and notice these 3 things you should know about cesarean delivery.

Cesarean delivery, what is it?

Cesarean delivery consists of a surgical procedure that involves making an opening in the mother’s womb that reaches the uterus, where the baby is removed. This procedure, performed with the woman awake, can be scheduled in advance or can be done in an emergency if unforeseen complication arise.

This intervention takes a maximum of one hour. Doctors will proceed to anesthetize the mother, either with spinal anesthesia, consisting of a single dose that takes effect instantly, or an epidural, provided gradually through a tube inserted in the back.

Once the body is anesthetized from the chest to the feet, the surgeon makes an incision through the abdomen just above the pubic area in order to open the uterus (womb) and the amniotic sac to finally be able to remove the baby, which is then cleansed by cleaning the liquids of the nose and mouth, as well as cutting the umbilical cord.

The neonatal team will check that the baby’s breathing is normal and that other vital signs are stable, while the obstetrician will remove the placenta and then close the incisions. Of course, the mother can see and even have her baby in her arms already in the delivery room.

In what cases is a cesarean delivery performed?

There are several reasons why a pregnant woman will undergo a cesarean section rather than a vaginal delivery. The gynecologist or obstetrician will decide the mode of delivery, taking into account not only the health and position of the baby but also the woman’s previous births and her medical history.

As we have already said, doctors can decide on a cesarean delivery in the case of an emergency or if they have it scheduled in advance. Pay attention, because the cases in which this procedure is used are those detailed below.

Recovery and care after a cesarean delivery

After cesarean delivery, the slow recovery of the woman requires great care: the hospitalization of the mother lasts 4 days, it is imperative to take care of the scar to avoid infections and it is even necessary to rest at home for four weeks. Therefore, it is essential to get help for your care and that of your baby.

Initially, you will feel pain when sneezing, coughing or performing any action that involves some pressure in the abdomen. Be calm and use your hands or a pillow to hold the incision when you laugh, cough or sneeze. Well, this discomfort will pass quickly and when you see your baby you will understand that everything has validated the pain.

You can also feel discomfort due to the accumulation of gases two days after the cesarean delivery. This is because the intestines are lazy after surgery. It can help if you walk back and forth a bit in the corridor so that your digestive system is put back into action.

Surely they will indicate analgesics to help with the pain and a drug that helps the body, in addition to advising you to stay hydrated to avoid constipation. With time you will see that this small incision will become imperceptible and that the discomforts will be only a memory of the battle that brought the greatest joy.