Crabs During Pregnancy: What You Need to Know

Beyond the logical discomfort that crabs during pregnancy can cause, the main problem is treatment. Today we'll look at how to react to their presence. 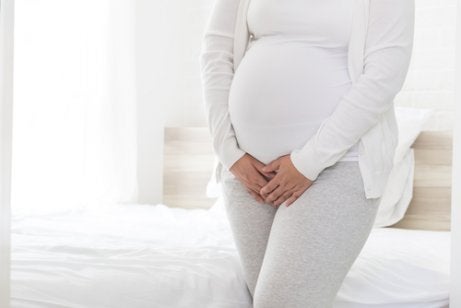 The scientific name of the insect responsible for crabs is Pthirus pubis. It’s an ectoparasitic insect, meaning it lives on the surface of its host, and measures between 1 and 2 millimeters long. It’s circular in shape, flat, and yellowish in color.

When pubic lice infect a man or woman’s genital region, the insect causes an infestation, also known as phthiriasis. What many people don’t know is that they aren’t exclusive to the pubic area.

Crabs can also affect a person’s hair, eyebrows, eyelashes, armpit hair and body hair. They usually lay eggs, which appear in the form of tiny white dots stuck to the roots of hairs. They have an incubation period of between six and eight days.

How do crabs spread?

Before focusing on the relationship between pubic lice and pregnancy, we should clarify what conditions can make infestation more likely. Below are the ways in which crabs spread:

Something that characterizes this insect is that it moves very slowly. Pubic lice advance some 10 centimeters per day. However, this doesn’t impede their proliferation. There are about 1 million cases of crabs worldwide each year.

How can you detect a crabs infestation? Below are some of the most frequent symptoms:

However, not all people suffer the same symptoms with the same intensity. In fact, many carry the parasite without even know it, which can easily lead to involuntary transmission to others.

Crabs during pregnancy: Are there risks to the mother and baby?

The possible relationship between crabs during pregnancy is something that worries many pregnant mothers who carry this parasite. To date, there are no reported cases of crabs causing negative consequences for the health of mothers or babies.

Just the same, it’s crucial you talk with a doctor before starting any treatment while you’re pregnant.

You should even check with your doctor before proceeding to use topical creams for pubic lice that you may have used in the past. This is because many of them aren’t indicated for pregnant women. Therefore, they could put your baby’s well-being and development at risk.

In the same way, certain medications for treating crabs aren’t recommended for pregnancy or breastfeeding. Mothers must be aware and extremely careful about what they ingest and apply to their bodies.

“Many topical creams aren’t indicated for pregnant women. Therefore, they could put your baby’s well-being and development at risk.”

Rule out the possibility of a sexually transmitted disease (STD)

During pregnancy, it’s vital that mothers undergo a series of thorough tests to rule out possible illness. Among those are sexually transmitted diseases like HIV.

This is even more important if a mother presents a case of pubic lice during pregnancy. This is because crabs can also be transmitted sexually. It’s also advisable that mothers who have changed sexual partners during gestation undergo this testing.

It’s understandable for women to be worried about if they experience an infestation of pubic lice during pregnancy. But the truth is, not much can be done to prevent it. Birth control methods like condoms are very effective against sexually transmitted diseases, but not against crabs.

The best thing you can do is to be sure your partner doesn’t have crabs and hasn’t experienced symptoms before having sexual contact. Also make sure to wash bedding with hot water, since the insects won’t be able to survive.

Again, crabs during pregnancy in itself doesn’t place pregnant mothers and their developing babies at risk. However, they can be hard to treat during this time period.

As we mentioned above, you should be extremely careful about taking medication or applying topical creams during gestation. Pay attention to possible symptoms and consult with your doctor as soon as possible.