Evolution of the Cesarean Technique 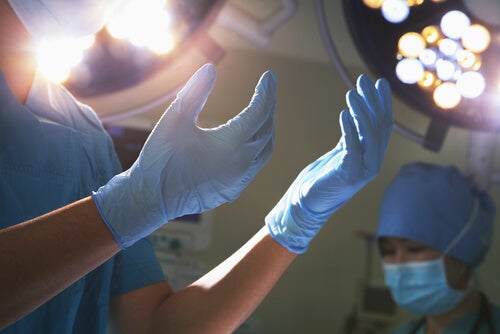 The evolution of the cesarean technique has had an impact in both the social sphere and the evolutionary field. As you know, a cesarean section is a surgical way of bringing a baby into the world, and it has become more common in recent times.

In today’s society, cesarean sections are no longer seen as a risky surgical procedure. On the contrary, they have been normalized to such a point that they cause little to no concern.

But how did this technique evolve and how has it changed humanity? How has it become so normal? Find out below.

What is a cesarean section?

A cesarean section is a technique in which the fetus is removed from the mother’s womb through surgery. It is one of the most common operations today. In addition, thanks to advances in medicine, it can be considered a technique that offers a guarantee of security.

In view of the frequency with which it is practiced, cesarean sections have become increasingly popular. Among others, one reason is because scientific advances allow the risks to be minimized for both the mother and the baby. The decision to perform a cesarean section may be due to several reasons:

The evolution of the cesarean technique

A popular myth often relates this technique to the birth of Julius Caesar, but this is quite unlikely because of the limited medical knowledge in those times. Rather, the name is due to the Latin word caedere, which means to cut, as in cut the maternal womb to extract the fetus.

Until the development of anesthesia and antibiotics, any surgical intervention posed a considerable risk. Because of these risks, a cesarean section was a last-resort decision until the second half of the twentieth century. It was done in cases of extreme risk for the mother and baby, and the technique didn’t offer a guarantee of success.

The first documented cesarean section is the one performed in the year 1794 in the United States. Jesse Bennett, the doctor who carried it out, performed it on his wife. She, together with the child, recovered satisfactorily, setting an important precedent in the history of medicine.

The cesarean section and human evolution

The development of science, and medicine in particular, has allowed us to achieve a better quality of life, in addition to extending our life expectancy. What is interesting to know is that this technical development has generated evolutionary changes. Women’s bodies have adapted to this technique.

The cesarean section is classified according to the area of the body where the cut is made. In this way, there is the corporal or classic cesarean and the segmental or low transverse cesarean. The corporal cesarean carries risks, so it is no longer frequently used.

Among the many classifications of the cesarean section, one divides it into two groups. The criterion that is used is the moment in which it is decided to carry out the cesarean:

The evolution of the cesarean technique has allowed a large number of births to take place, and it has become one of the most common medical procedures. In Spain, 25% of children are born using this technique, which actually exceeds the recommendations of the World Health Organization. They advise it to remain at around 15%.

Undoubtedly, the evolution of this technique is a human achievement. But ideally, it is performed when medically necessary for mother and child.