Why is it necessary to take a glucose test during pregnancy? How is it performed? Who is most likely to be affected? What if it comes out positive? Find out the answers to these questions below. 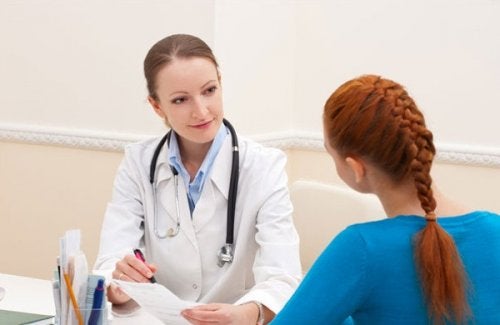 The glucose test is a routine test during pregnancy. Doctors perform it between weeks 24 and 28 of pregnancy. Its goal is to rule out gestational diabetes.

Gestational diabetes generally affects a low percentage of women. This means they have a high blood sugar level. It doesn’t affect more than 5% of pregnant women.

However, you shouldn’t be scared. As we mentioned before, it’s a routine test that all pregnant women get. In addition, it isn’t very invasive or annoying.

Next, we’ll tell you how doctors perform it. We’ll also give you some recommendations in case the result is positive.

The glucose test during pregnancy

Why do you need to have a glucose test?

Specialists have pregnant women get this test for certain reasons. Mainly, changes in the pancreas during pregnancy are asymptomatic.

This means that women don’t feel any discomfort related to their insulin levels. Therefore, the only way to know if you have gestational diabetes is from the test.

How does the test measure if glucose levels are high?

The parameters used to establish whether mothers have abnormal blood glucose levels vary depending on each doctor. However, they all follow these similar guidelines:

How does the doctor perform the test?

To perform this test, women don’t need to go through any special preparation. On the contrary, doctors tell women to eat the foods they normally do the week before the test. This will help make sure the results have accurate information.

There are two types of glucose tests for pregnancy. In the first, women drink a substance that contains glucose.

After waiting an hour, a doctor will draw a blood sample. That way, they can see how the pancreas processes drinking a sugary drink.

If the values from the first glucose test are high, they need to schedule a second fasting test. In it, after drinking a sugary drink, the doctor will take two blood samples after 3 hours.

“Specialists have pregnant women get this test for certain reasons. Mainly, changes in the pancreas during pregnancy are asymptomatic.”

Possible discomfort during a glucose test

In most cases, patients don’t feel uncomfortable when they have a glucose test. A very low percent of women feel nauseous or vomit.

This is more common in the second glucose test. They need to drink more glucose over 3 hours, which may make them feel sick.

If you find out that you have gestational diabetes after the tests, don’t panic. In most cases, pregnant women only have this condition during pregnancy. After delivery, it normally goes away.

However, this doesn’t mean that you should leave it untreated. It’s important to follow whatever diet plan your doctor or nutritionist puts you on.

Also, it’s important to carefully follow the advice they give you about how to keep your baby healthy. It’s a fact that mothers who don’t change their eating habits may still have diabetes after pregnancy.

In conclusion, the glucose test for pregnancy is nothing more than a routine test. Its job is to make sure that you’re healthy while you’re pregnancy. Don’t forget, food is the key to an overall healthy pregnancy.