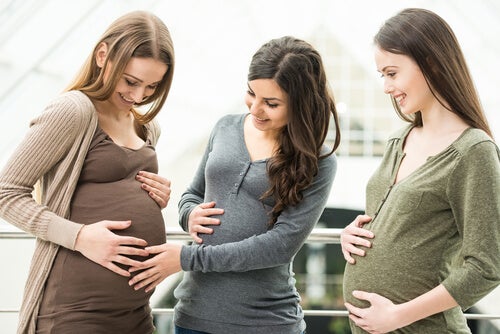 In order to answer the question about whether motherhood is contagious, we’ll share the results of numerous studies with you.

Are your friends pregnant? Well then, it’s possible that you’ll be next. Several studies show that a friend’s pregnancy can trigger your desire to become a mother.

Motherhood can be said to be contagious, especially between the first 12 and 23 months of the child’s life. This effect then slowly diminishes until it disappears after the child’s third birthday.

Why is motherhood contagious?

Apart from the biological clock, there are two other explanations for why motherhood is contagious. Firstly, women who are frightened by the idea of becoming mothers may want to start trying when they see their friends becoming successful mothers.

Secondly, from a social point of view, when members of a group of friends get pregnant, the other members may not want to feel abandoned.

When a friend gets pregnant, the other friend may feel they cannot fully share the experience and this will cause the person to feel a little out of place.

If there is already a previous desire to have a child, having a friend who just had a baby will give further impulse to start the project of motherhood. It’s reassuring and exciting to know that someone else has gone through the same thing.

Finally, it’s also easier to maintain a friendship if you’re experiencing parenting at the same time. This way, it’s easier to share experiences. It also allows the children to become friends from the moment they begin to take their first steps.

“Life is a flame that is always burning, but it gets reignited every time a child is born.”

What are the benefits of becoming a mother at the same time as your friends?

Becoming a mother at the same time as your friends may bring many benefits. Friends can share their experiences and this will help reduce the stress when the time comes to assume this new and important role.

Here are 4 benefits of becoming a mother at the same time as your friends:

1. A future friend for your child

Many children are born without having a playmate. It’s beneficial to have your child close to other children who are the same age. Having a child at the same time as your friends will make your future meetings play-dates as well.

When a pregnant woman shares the news about her pregnancy with her friends, the friends who have already had children may start to remember their past experiences, igniting a desire to relive them.

The excitement of hearing the news about a pregnancy can motivate women who have already had children to repeat the experience, encouraging them to be mothers once again.

3. Strength when confronted with fears and insecurities

Women generally fear pregnancy and the responsibilities they’ll face after childbirth. If you get pregnant during the same period as a friend, you’ll be able to share your fears, doubts and anxiety with her. This will help promote strength and confidence.

Many women are motivated to become mothers when their friends suddenly change their lifestyles.

When you have a pregnant friend and you also decide to have a child, you’ll be able to share many activities with her that will help strengthen your bond. You’ll also be able to maintain similar lifestyles.

In conclusion, having a child brings a lot of uncertainty both in social and financial terms. That’s why doing it together with a friend transforms it from an unknown experience into a shared one.

As you can see, motherhood can be contagious. Therefore, if you have a friend who is pregnant and you aren’t pregnant yet, you just may be next!