All You Need to Know About Fertilization 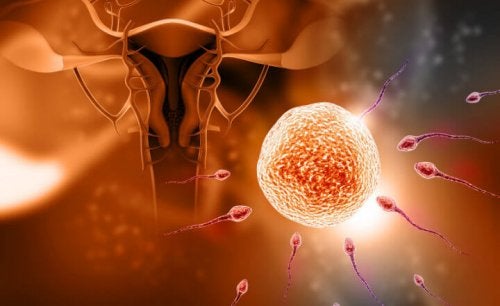 Human fertilization is a complex process where many elements and factors come into play. It has to do with the fusion of an egg and a sperm cell in order to create a new and unique being.

The union between these two cells creates an embryo, and if it is implanted correctly, pregnancy occurs.

How does fertilization occur

In human beings, this process occurs internally. That means it takes place inside the woman’s body. Specifically, it occurs inside the Fallopian tubes. This is known as “natural” or in vivo fertilization.

In this article, we’ll share with you the stages of this complex process, from the separate existence of the gametes to their union and implantation.

1. The sperm cell heads towards the ovule

“Out of hundreds of millions of sperm cells, only one will manage to enter and fertilize the ovule.”

During intercourse, sperm penetrate the vagina. The vagina has an acidic medium that is harmful to sperm cells and this causes them to migrate.

Through the cervix, the cells reach the uterus and from there they migrate towards the Fallopian tubes, where the ovule is found.

In the tube, sperm can survive for between 48 and 72 hours. On the contrary, outside of the body sperm can only live for less than 24 hours. This effectively means that fertilization can occur up to two or three days after sexual intercourse.

Semen contains hundreds of millions of sperm cells. Less than a hundred, however, will be able to reach the ovule. The rest of the sperm dies off. Among the “survivors” only one sperm cell will be able to enter the ovule in order to fertilize it.

2. Union of the ovule and sperm cell

Upon entering the ovule, the sperm cell loses its tail and it fuses with the nucleus of the female cell. This union creates the first cell of the embryo which is known as the fertilized egg or zygote.

All of the necessary genetic information can be found inside a zygote, from the color of eyes to its sex.

When fertilization occurs, the ovule alters in chemical structure. The membrane that surrounds it which was permeable becomes impermeable to prevent the entrance of other sperm cells.

If more than one sperm cell enters the ovule, fertilization does not occur.

3. The zygote’s journey to the uterus

In the Fallopian tubes there are hairs known as cilia. The movement of cilia causes the fertilized egg to move. The fertilized egg slowly moves towards the uterus; this can take up to 4 days

During this journey, the zygote begins its development and evolution. A few hours after fertilization, it divides into two cells and it continues dividing equally. When it reaches the uterine cavity the zygote already consists of 16 cells.

The zygote doesn’t nest as soon as it reaches the uterine cavity, it still has to continue developing. It will remain in the cavity for two to three days before implanting itself in the uterus.

“Only 30% of embryos successfully implant in the womb.”

Implantation takes place 7 days after fertilization. This usually occurs between 21 and 22 days after the last period. The zygote implants itself in the endometrium and it adheres strongly, like a suction cup.

The outer layer of the zygote creates a type of nest and it forms a trophoblast, a membrane that will give rise to the placenta.

The placenta will nourish and protect the baby during pregnancy. From this moment on, the embryo continues in constant development.

Contrary to popular belief, twins do not arise from the fertilization of eggs by two sperm cells. The mechanisms of fertilization prevent this occurrence.

When it comes to twins, the process is identical to the one that gives rise to single embryos.

However, sometimes and for reasons that remain unknown, the embryo divides into two, giving rise to two genetically identical babies. This implies that they will also be the same sex.

On the other hand, when it comes to fraternal twins, the origin is a little different. In this case, fertilization of two different ovules occur by two different sperm cells. Therefore, they develop into two embryos that will not be identical like the case mentioned above.