Does the Moon Influence Childbirth?

Certainly, you've heard that the moon influences the seas and even the human brain. It also influences many women when making decisions about their pregnancy. 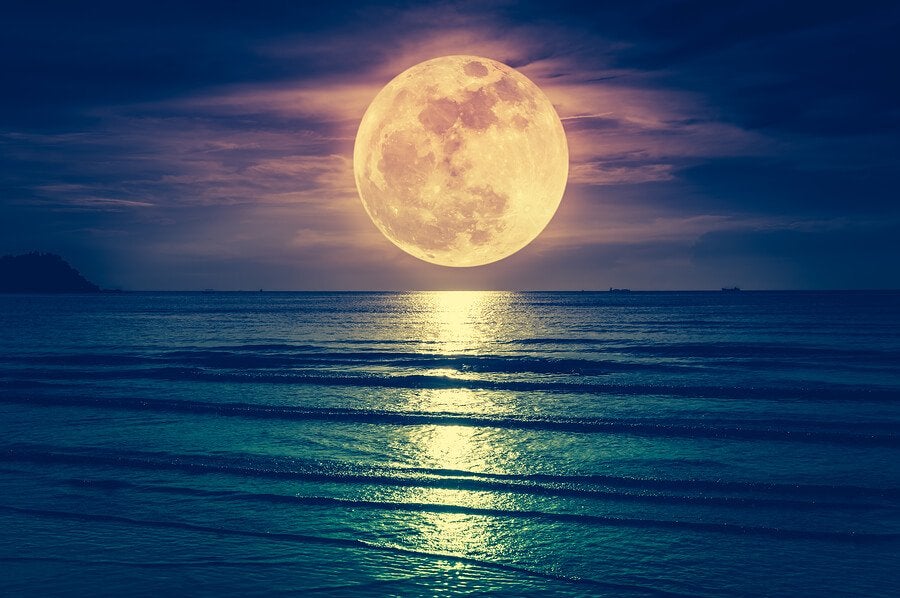 Does the moon influence childbirth? We’ve heard different theories on this topic for a long time. This natural satellite has motivated people to analyze how it affects our bodies and environment, even from birth.

Since ancient times, people have associated periods with the lunar cycle. Both of them are 28 days long. In those times, ovulation was related to the full moon, and periods with the new moon. Women who had reverse cycles were considered witches.

During the full moon, more babies tend to be born. Is this a coincidence? Some people also believe that faster and easier births are more likely during this phase. However, there isn’t scientific proof to show that the moon has anything to do with these numbers.

Why do so many people believe that the moon influences childbirth?

From the moment Isaac Newton published his theories of gravity in 1687, we started to understand how the moon and sun exert forces. These affect the bodies of water. Prior to that, primitive humans already related lunar phases to the tides. It turns out that they were right.

It’s well known that the phases of the moon influence the oceans by the laws of gravity. So, could they also affect people since we’re mainly made of water? Would they affect the water-based bubble where the baby grows inside his mother’s womb?

There are many questions that researchers have tried to answer. However, we still can’t forget about the moon’s effects on processes in the human body.

Many nurses and midwives will surely agree. Depending on the lunar cycle when a baby is born, the birth will have certain characteristics. For many of them, it definitely influences childbirth.

These women who have experience bringing babies into the world also believe that the moon can influence the baby’s sex. Even so, there isn’t enough evidence to prove this theory. It’s also not enough to prove the link between lunar phases and childbirth.

Types of birth according to the lunar cycle

The lunar phases are believed to influence certain characteristics of childbirth. Here are a few of them:

In this period, you’re more likely to have broken amniotic bags. The number of deliveries decreases in this phase. Those that do take place usually involve more work than normal.

Usually, the babies are in a bad position. Their delivery becomes much more complicated.

During the full moon, compared to other parts of the cycle, more births occur. Is it a coincidence?

In this phase, there are a greater number of caesarean sections and births due to slow dilation. Despite this, they’re usually considered easy or normal births since they often don’t have complications.

Those who believe that lunar phases influence childbirth say that more babies come into the world during this phase. C-sections are unlikely. Pregnancies that end in this part of the lunar cycle have completed nine full months.

Midwives are certain that births in this phase are much faster. In these circumstances, the mothers go into labor dilated. They’re ready for a natural birth without complications.

They’re so spontaneous that sometimes the mother doesn’t have time to get ready when she goes into labor.

Without a doubt, everything about this topic is very interesting. However, there is still no statistical evidence that the moon affects childbirth.

Therefore, everything here is just an assumption. Many people are waiting for scientific evidence and research to know the facts.

The lunar phases’ influence on childbirth will always be a topic that generates a lot of interest. It might even motivate some women to take the moon into consideration when trying to conceive.