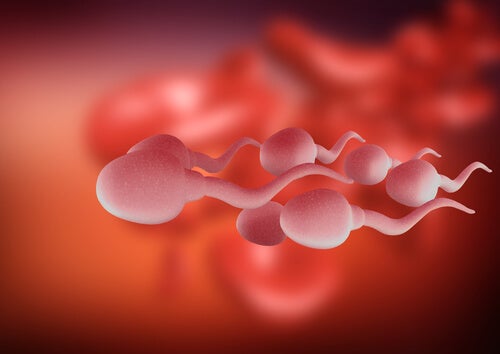 Sperm’s fight for survival begins after ejaculation. Nearly 200 million of these cells race to the female’s egg in order to fertilize it. We’ll detail the route of this fascinating event below.

Although it may not seem like it, fertilization is one of the most complex processes studied in biology.

Why do sperm fight to survive?

Spermatozoa are differentiated cells, which means that each of them is completely unique. This also means that sperm can’t regenerate within the female system, and they’re therefore forced to fight for survival.

After ejaculation, uterine contractions and the woman’s immune system cause oxidative stress that damages these cells.

Of course, there are many other obstacles that must be overcome to be able to fertilize an egg.

But, what does this road look like? What’s so peculiar about it?

Sperm in the female reproductive organs

Once in the vagina, sperm must travel a distance of 15 to 18 centimeters in order to reach the ovule.

Once the presence of sperm in the vagina is detected, certain control mechanisms are put in place.

During the time it takes to travel this distance, the body of the future mother generates a kind of reaction.

This reaction is designed to modulate the route of the male gametes as they travel to reach the ovule.

The first barrier is related to the woman’s vaginal pH. Because it’s acidic (pH of around 5), some of the sperm die.

Another obstacle has to do with the immune system. Because it’s an organ that connects to the outside world, the vagina has antimicrobial defenses that can also affect male gametes.

To counteract these barriers and pass through the vagina, the seminal plasma enacts certain protections. This means substances that inhibit phagocytosis are secreted.

The pH of seminal plasma is higher than the pH of the vagina. When the two come into contact, the pH is neutralized, and the destruction of the male gametes is prevented.

The second phase of sperm’s fight for survival arrives. The sperm must now pass through the cervix. By this stage, most have been left by the wayside.

However, to facilitate this transit, the cervix secretes a mucus composed of 96% water, making it possible for the sperm to pass through.

The anatomy of the cervix is composed of crypts. Sperm can be trapped in these crypts, preventing its progress.

Sperm can survive up to 5 days after intercourse. They can leave the crypts and continue on to fertilization.

Advancing through the uterus

Before reaching the uterus, the sperm must pass through the mucus that lines the cervix. If ovulation has already occurred, the mucus will be more watery and thus easier for the sperm to travel through.

Sperm can pass through the uterine cavity in 10 minutes. This occurs because the uterus and the Fallopian tubes produce a contraction that sucks the sperm in and facilitates its arrival to the ovum.

At this point, the gametes must cross into the uterotubal junction. It is the narrowest part of the route.

To continue its path to the ovum, two changes occur in the sperm. First of all, they become hyperactive and move faster.

Second, the gamete’s plasma membrane changes to pass through the protective layers of the ovule.

Proximity to the oocyte

Hyperactivity is crucial for the sperm to cross the membrane that covers the oocyte. In addition to this, a guide system is activated in the tubes that leads the sperm to the ovule.

Of the millions of sperm that entered the vagina, only dozens survive to the final stages.

The next barrier is penetrating the cells that protect the ovule. As soon as this is achieved, one of the sperm releases an enzyme and the acrosome reaction is activated.

Immediately, the egg generates a shell around it so that no other sperm can fertilize it. This guarantees the further development of the embryo.

This is the route that sperm must make in order to fertilize the ovule. It’s a survival path where only one reaches the goal despite the millions that try.

The rest of the sperm die from exhaustion, from anomalous morphology or by the woman’s immune system.