What to Do If You Have a Breech Baby

The baby’s position at the time of delivery is essential. What should you do if you have a breech baby? In this article, we'll show you some turning techniques. 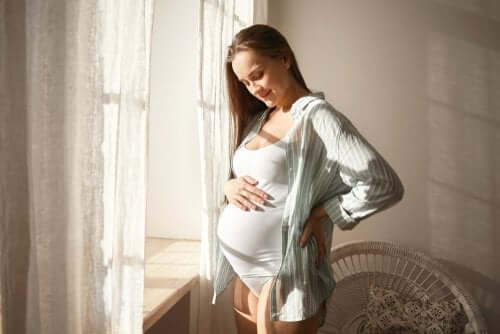 Experts estimate that approximately 4% of babies are breech. In virtually all health facilities, if the baby isn’t head first in the mother’s pelvis (in the cephalic position), medical professionals may perform an elective Caesarean section for a breech baby in the case of first-time mothers.

In case the mother had previous vaginal deliveries, and after signing an informed consent, she may have a vaginal breech birth.

According to medical works, there are several techniques to turn the baby. Some of them can be considered prior to a Caesarean section indication. Others seem very rare, but they aren’t invasive and pose no risk to either the mother or the baby.

Since we have nothing to lose, I, as a midwife, suggest trying them out.

Techniques for turning a breech baby

A traditional Chinese medicine technique. It involves stimulating the bladder meridian, which lies on the nail of the little finger of the foot with dried mugwort.

Several studies show that it’s a safe and inexpensive technique that doesn’t have any side effects for mother and baby. If performed on approximately week 34 of pregnancy, the success rate is approximately 77% (according to a publication by FAME).

In addition, midwives can show it to couples so they can perform it in their own homes.

It consists of placing your head and trunk below the level of the pelvis. You can kneel on your arms and hands, flat on the floor (such as the Mohammedan prayer posture).

To be more comfortable, you can place some cushions under your belly. You must try to leave as much space as possible for the baby to move, with your knees wide apart, not pushing on your belly.

While you’re in this position, you can try to balance the pelvis to encourage the fetus to change position. You can also take advantage of this position to take deep breaths, bringing air to the baby and trying to relax your abdominal muscles.

Although there’s little scientific evidence on this technique, experts do know that the mother and fetus are in continuous communication. Thus, you can visualize the baby inside you, encouraging them and talking to them to change position and, thus, promote vaginal delivery.

The yoga pose known as “the cat” consists of getting on your hands and knees with your hands under your shoulders and your knees under your hips and rounding your spine towards the ceiling while you breathe.

Crawling and getting on all fours offers the baby plenty of room to turn around. It’s a simple technique that you can easily try in your own home if you have a breech baby.

Experts know that, from the early weeks of pregnancy, the fetus responds to different external stimuli. Thus, you can help your baby turn by stimulating senses, such as sight, by placing a light near your pelvis.

Also, you can play music near the maternal pubis. In addition, experts know that the cold bothers babies (like most of us). Thus, if you apply cold compresses on the area where the baby’s head is, they’ll move to avoid feeling cold.

It’s true that a rigid abdomen with tense muscles and structures won’t allow a baby to move. Thus, loosening the muscles can give the baby enough space to turn.

This is a method performed by a gynecologist in the hospital and under ultrasound control. It’s decreased the Caesarean section rate (with the benefits that this entails for both mother and baby).

Simple, effective, and relatively safe, this method has increased the rate of cephalic vaginal births. The risks described are water breaking, the need to practice a Caesarean section due to placental abruption, or fetal loss of welfare.

Now that you know some techniques to help a breech baby change position, it’s your decision to try them out.

Recently, as a result of poor food processing, Spain registered an outbreak of listeriosis. In Spain, many people were infected.…

Women experience many physical and hormonal changes during pregnancy. Because of that, it's normal for pregnant women to experience anxiety…