What Is Implantation Bleeding During Pregnancy?

We have to be aware of the changes happening to our bodies during pregnancy, so that we're able to tell a doctor if there’s an irregularity. Implantation bleeding isn't a change we need to worry about. 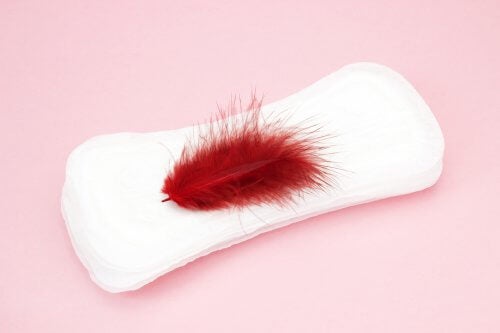 Implantation bleeding shouldn’t cause concern if it occurs during the first two trimesters of pregnancy. It’s just a small loss of blood that is very normal and barely noticeable.

Now, why does it happen? And how can we distinguish it from menstruation or a hemorrhage? In the following article we’ll discuss the answers.

Implantation bleeding occurs when the fertilized ovum travels down into the uterus. As a result of this, several veins and arteries in the uterus wall rupture and bleed.

So, when does it occur? Generally, it occurs between 5 and 10 days after the egg has been fertilized. In terms of duration, it’s fairly brief, lasting between 1 and 3 days. And given that the amount of blood loss is minimal, you don’t need to worry too much. The bleeding will stop by itself.

How and why does it occur?

The process begins within the first 12 hours of the egg fusing with the spermatozoid. Immediately after fertilization, while the zygote travels to the uterus, the nucleus of the spermatozoid and the egg fuse and cause rapid call division, this cell division is the beginning of the embryo.

Once formed, the embryo begins to develop in the uterus. It implants itself into the uterine wall, where it continues to develop. It’s possible to experience implantation bleeding at any stage of this process.

In certain cases, implantation bleeding is so light that it’s barely noticeable. It only occurs in 1 in 5 women, and it’s lighter in some women than others.

Implantation bleeding is considered to be one of the many symptoms to appear during pregnancy. However, it’s important to remember that every woman is different.

In terms of the color, this varies from pink to light brown. Never compare it to the dark color of period blood. It isn’t a hemorrhage, rather a small stain that you’ll notice in underwear. In terms of the pain, this should be light.

Some women suffer from more discomfort when experiencing implantation bleeding. It’s possible to experience cramps in your pelvic zone, however, this shouldn’t be more than a light discomfort.

In the worse cases, the pain will be something more similar to the period pain experienced at the start of menstruation.

If a woman is sexually active, whether she’s pregnant or not, she should be aware of any changes in her body, above all, changes to her periods.

Or course, you need to visit your gynecologist if you experience particularly strong pelvic pains, as they could be caused by cysts or endometriosis.

Among other physical characteristics of implantation bleeding, it’s important to mention that for most women, its odor isn’t noticeable, although some women experience bleeding that smells simply of “old” blood.

As mentioned previously, in terms of how long the bleeding lasts, it’s quite brief and doesn’t tend to last longer than 2 or 3 days. If it lasts slightly longer than this, it’s recommended that you visit a specialist so they can rule out any gynecological abnormality: such as a miscarriage or an ectopic pregnancy.

If you experience implantation bleeding, try not to worry too much about it. Follow the advice of your specialist and aim to go back to normal after 2 to 3 days of bleeding. If you worry too much, the stress might play tricks on you and cause your body to somaticize your worries.

In terms of your everyday life, this shouldn’t change as you don’t need to do anything in particular (unless your doctor has told you to). A balanced diet, keeping hydrated, and regular exercise will help to clear your mind and allow you to enjoy a healthy lifestyle.

In very few cases, your doctor might recommend that you take some form of analgesic (in a low dose) in order to alleviate pelvic pains. Remember, you shouldn’t resort to self-medicating under any circumstance.