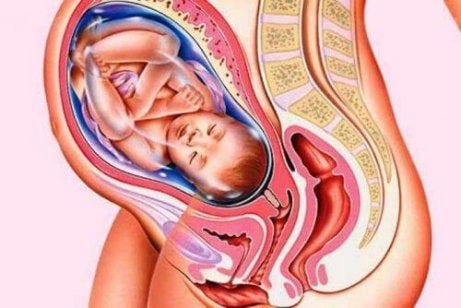 During pregnancy, the uterine wall, or cervix, plays a key role. This organ must function efficiently in order for implantation to occur. The cervix must be strong enough to bear with the entire pregnancy process. However, some women may suffer from an insufficient cervix.

Insufficient cervix refers to the weakened functioning of this organ. This situation can cause serious consequences during pregnancy.

As pregnancy advances, the cervix has greater and greater difficulty. The weight and pressure that the baby places on the uterine wall increases, and this can cause the cervix to open prematurely.

What are the causes of insufficient cervix?

This condition can occur naturally in any woman. However, the weakening of the uterine wall is, in most cases, the result of some procedure. Some of the factors that may cause a woman to present insufficient cervix are the following:

What are the implications of having insufficient cervix?

Despite the diverse causes of this condition, insufficient cervix affects only 1 in every 100 pregnancies. However, that being said, it’s an issue that can seriously affect the gestation process.

As the baby grows within the uterus, he or she becomes heavier and heavier. As a result, all of this weight creates pressure on the uterine wall. In turn, the cervix begins to yield as the time of birth approaches.

In other words, a weakened cervix can be a risk to pregnancy. An insufficient cervix can’t adequately bear the ever increasing pressure.

Having an insufficient cervix can lead to the following risks:

Despite the seriousness of the complications that can result from the procedure, they are uncommon.

Specialists consider cerclage to be a safe procedure in general. As it can be life-saving both for mother and baby, most women prefer to face the possible risks.

How is insufficient cervix diagnosed?

Your gynecologist cannot detect insufficient cervix during a routine examination. Furthermore, this condition is only detectable during pregnancy. Generally, a miscarriage in the second or third trimester can be an indication.

However, if the above mentioned risk factors apply to you, then you can consider a more precise examination early on.

Transvaginal ultrasounds are effective in diagnosing women who are at risk of insufficient cervix. The ultrasound images allow doctors to measure the length and opening of the cervix.

A pelvic exam can also lead to the detection of a weakened cervix. If a doctor discovers that fetal membranes are in the cervical canal or vagina, this is an indication of cervical insufficiency.

Lab tests of amniotic fluid are also useful in making a diagnosis, as they serve to rule out possible infection.

Once a medical professional has detected insufficient cervix, the next step is probably cerclage. This procedure, which must take place before week 24, consists of stitching a suture to close the cervix. The stitches are removed between weeks 36 and 38 in preparation for childbirth.

However, cervical cerclage is not an option when the woman has already dilated more than 4 cm or has broken membranes.

The success of the pregnancy depends on several factors. The cervix must be able to bear all of the weight and pressure produced by the fetus until childbirth.

Having an insufficient cervix can be complex. However, this condition is not common, and solutions are available.

Whatever the case may be, it’s important to see a specialist frequently throughout your pregnancy. This can save both your life and that of your child.