What Is Lochia and Why Is It Produced? 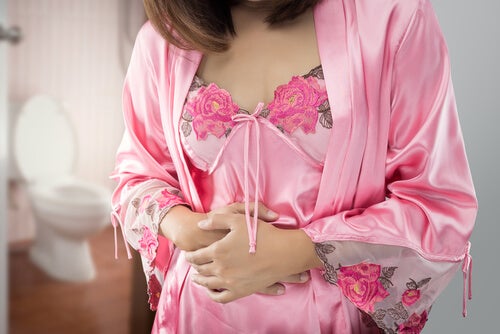 Lochia is a type of vaginal discharge that contains uterine tissues and blood. It occurs after giving birth and indicates the normalization of the uterus.

The loss of blood that a woman experiences right after giving birth is known as lochia. It lasts for approximately 40 days, which is also known as the puerperium.

Why is lochia produced?

Lochia is a sign that the uterus is returning to its normal pre-gestational condition. The appearance of lochia is due to two factors:

The placenta is the organ responsible for providing oxygen and nutrients to the fetus during pregnancy. The placenta is attached to the uterus. When it detaches from the uterus after birth, a wound is generated at the point of union that was between the two organs.

White blood cells are responsible for protecting the wound from germs and they also play a role in preventing infection. As the white blood cells create a barrier, the amount of bleeding reduces.

The healing of the wound involves a unique process. It can be described as the complete reconstruction of tissues. Unlike with other wounds, scars should not be formed inside of the uterus. A scar could prevent fertilization in the future.

In other words, a fertilized egg won’t be able to implant in the uterus, and this would prevent pregnancy. After childbirth, this wound heals in approximately 4 weeks.

Elimination of the lining of the uterus

During pregnancy, the uterus is covered with tissues that make the baby comfortable. Most of this tissue is expelled during labor. The rest however, is expelled little by little. This is another cause of lochia.

At this stage, lochia is made up of relatively large amounts of blood loss. The color of the lochia is usually intense red during the first week.

These secretions may be accompanied by uterine contractions. Contractions occur in order to facilitate the expulsion of residues in the uterus. The residue that is initially found in the uterus is made up of the placenta, blood and various microorganisms.

At this stage the blood loss begins to decrease gradually. This happens as the wound closes up due to the accumulation of white blood cells. The color of lochia changes and it becomes yellow or pink.

During this stage the lochia contains blood serum and white blood cells. The expulsion of the membrane that covered the uterus during pregnancy also occurs around this time.

After two weeks, lochia is made up almost completely of white blood cells. Thus the secretion begins to acquire a thick white color.

“Lochia is a type of blood loss that occurs during the puerperium and indicates the normalization of the uterus.”

Mothers should prepare a bag for delivery. Apart from comfortable clothes such as cotton gowns, comfortable slippers and clothes for the baby, the bag should also contain sanitary pads.

During this stage, ultra-absorbent pads are recommended. In addition, waterproof and disposable materials are available in the pharmacy. These are useful to protect mattresses.

A strange fact is that as a mother breastfeeds, lochia reduces in quantity. This occurs because the body starts to produce hormones such as prolactin and oxytocin.

Prolactin is a hormone that plays a role in milk production. Oxytocin on the other hand, helps the uterus contract. These contractions help eliminate residue found in the uterus.

During puerperium (6 to 8 weeks after delivery) sexual intercourse should be avoided. During this period the uterus is still healing. Contact with external substances could cause an infection.

Therefore, it’s also important to avoid tampons because they may promote the entry of germs into the uterus.

In order to avoid risks, the vagina should be washed with special soaps. Remember that the hygiene of the intimate areas should be carried out from front to back. This is done in order to prevent contact with feces.

Visit your doctor if you notice abundant bleeding that doesn’t reduce after the first two weeks. The same conduct should be taken if you notice bad odors or if you’re suffering from intense pain.