What Is a Lotus Birth? 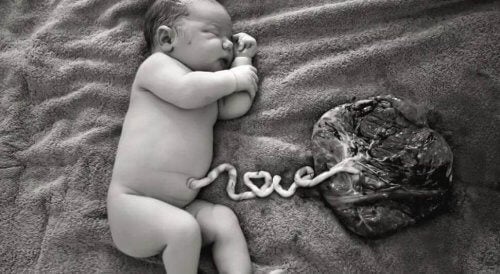 A lotus birth is a practice that sees birth in a particular way. In a lotus birth, the placenta is left attached to the baby through the umbilical cord until it’s naturally detached. This process usually lasts between 3 to 10 days after delivery.

In the vast majority of natural births, the umbilical cord is artificially cut after birth, and thus the baby’s union with its placenta comes to an end. This is a task carried out by the doctors or midwife.

A lotus birth allows this separation to occur gradually. That is, the baby continues to be attached to its natural source of nutrients, the placenta, until nature dictates otherwise.

Normally, the umbilical cord falls off between 3 and 10 days after delivery. In that moment, the child separates from the connection that has kept him together with his mother for nine months of gestation.

A birth planned according to this practice doesn’t involve any outside intervention to remove the umbilical cord. The stages that comprise a lotus birth are as follows:

Origin of the lotus birth

The lotus birth owes its name to its originator, Clair Lotus Day. In 1974, this researcher from California questioned everything related to the cutting of the umbilical cord, and even studied the work of primatologist Jane Goodall.

This researcher’s investigation and her concern for the method of cutting the umbilical cord led her to give birth following this new practice. Since then, many births have been carried out in this way, which has generated various controversies.

There are conflicting opinions regarding this way of giving birth.

On the one hand, the traditional view considers this practice to be a risk factor for the baby. Fundamentally, it’s seen as a source of infections if care isn’t taken regarding preservation of the placenta.

On the other hand, it appeals to those who want to prioritize a natural process. Emphasis is placed on the advantages associated with the provision of nutrients to the baby and a less drastic separation of its main source of life during pregnancy.

The placenta is the baby’s main source of nutrients. It’s an organ that pumps 500-700 ml of blood into the uterus every minute. In this way, it provides oxygen to the baby, as well as hormones.

It’s also responsible for discarding harmful substances through the mother’s bloodstream. The mother’s system then filters the blood through her kidneys.

After birth, the placenta continues to provide nutrients through the umbilical cord.

Those who defend the lotus birth consider it a gradual way of helping the child adapt to new conditions, and that the contribution of nutrients that is received outside of the womb is essential for the baby’s growth, development and health.

The process requires specific care that should be known in order to avoid infections and other more serious problems:

The conception that circulates around the lotus birth is a vision of medicine, nature and the human being. According to scholars of the subject, it’s a process that challenges many medical myths that we’ve grown accustomed to.

When considering the fact that the placenta is an integral part of the baby, the natural attitude is to let the process develop according to its organic phases.

The truth is that it entails a different way of looking at birth and like all medical procedures, it’s recommended that you consult with your doctor before any decisions are made.