Benefits of Music Therapy during Pregnancy 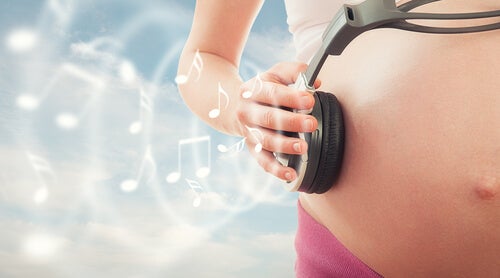 When hearing the term “music therapy” most people think that it refers to using certain types of music to modify a person’s mood.

However, the World Federation of Music Therapy provides a more precise definition. Music therapy is the use of music and its components to facilitate a patient’s learning and to help the patient relate to his or her surroundings.

Music therapy works as a sort of treatment that aims at restoring a person’s health and quality of life. In other words, it helps as a tool for rehabilitation.

Rolando Benenzon is an Argentine psychiatrist, psychoanalyst, pianist, musician and composer. He’s also the founder of Music Therapy studies at the University of San Salvador in Buenos Aires. He has published a number of articles concerning Music Therapy.

Benenzon is the most recognized professional in the world in utilizing Music Therapy in patients with autism, patients who are comatose, and also in the area of professional formation.

According to Dr. Benenzon, music therapy isn’t simply a patient passively listening to one kind of music or another. The therapy is much more interactive, and depends greatly on the relationship between the therapist and the patient.

Music therapy incorporates a wide variety of sources of sound, movement, music and the body itself. It involves several actions that favor a person’s integration in his or her community, and the development of learning processes.

Sound identity may sound like a bit of an abstract idea. However, the following statement made by Benenzon – its creator – can help shed some light on the subject:

I refer to Sound Identity as the sum of the energies formed by sounds, movements and silences that characterize every human being.

In other words, sound identity is about what a person’s senses can pick up. Sounds, mainly, but also silences, aromas and other smells, textures, temperatures, and all types of perceptions that are difficult to recognize but that distinguish one individual from the rest.

Gestatic sound identity is that of the individual himself. In other words, it’s what characterizes the individual and makes him different from others.

It accumulates genetically inherited sound energies in the person’s unconscious. They are the energies that are given off during conception and gestation and that change according to one’s social environment.

The sounds that occur during gestation and that form part of a person’s Gestalt sound identity make an impression on the individual.

The flow of the mother’s blood through the walls of the uterus, the beating of her heart, the sound of her breathing as he inhales and exhales… And of course the sounds produced by digestion – especially by the intestines. All of these noises are a sort of communication between the mother and her baby.

The mother’s heartbeats are sounds that produce the greatest amount of satisfaction. This is because they represent oxygen, nourishment and warmth for the baby.

The mother’s voice is also extremely important and meaningful in the formation of one’s Gestalt sound identity. The stimulation it provides for the growing fetus is two-fold. The baby can hear her voice and also feel its vibration.

The sense of hearing is the sense that most connects the fetus with the outside world. Some studies indicate that unborn babies react to certain auditory stimuli when they begin to recognize them.

For example, when they hear a song they recognize, they begin to suckle, they open and close their eyelids, or their heart rate may increase.

The company of a musical therapist during pregnancy can produce extremely positive results. There are many actions that can make each stage of gestation pleasant for the mother.

Furthermore, it also helps produce a bond between the parents and their child – above and beyond the natural connection that already exists.

The first stimulation is for the mother. A musical therapist can help reduce stress levels and any other uncomfortable emotion that the mother is experiencing in regards to her pregnancy.

Furthermore, the therapist will help the mother become more aware of her pregnancy and produce a true acceptance of the process she is undergoing.

After 14 weeks, the fetus can hear the sounds that are produced in the uterus. After another 6 weeks, the baby can hear sounds from the outside world as well. This is a period when the bond between the parents and their baby can deepen.

The mother and father’s voices and the lullabies that the baby hears help strengthen this bond. Therapy may also involve visualizing the baby or other practices.

The goal of music therapy during pregnancy is to express love, acceptance, tranquility – emotions that will have a positive effect on the baby’s development.