The consumption of illegal drugs and the abuse of prescription drugs, as well as alcohol and tobacco, can cause many health problems for a pregnant woman and her child. Let's see why it happens and how to treat withdrawal syndrome in infants. 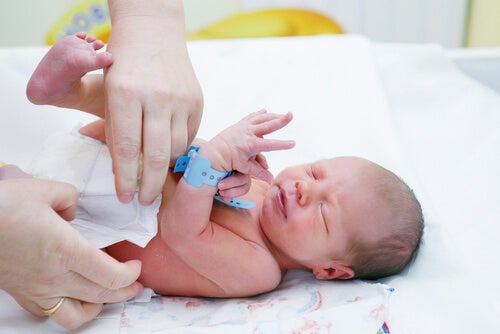 Neonatal Abstinence Syndrome (NAS) occurs when the mother uses addictive drugs during pregnancy, whether prescribed or illegal. It can trigger many inconveniences and health problems for the baby.

In this article, we’ll discuss the main effects and their treatments.

Drugs such as amphetamines, barbiturates, cocaine, diazepam, marijuana or opiates (heroin, methadone, codeine) cause negative consequences. They affect both the mother and baby during pregnancy.

The same thing can happen with prescription drugs when someone abuses them, as well as with alcohol or tobacco.

Neonatal Abstinence Syndrome (NAS) is caused because these drugs reach the placenta and, consequently, are transmitted to the baby. This makes them both addicted.

As the baby stops receiving it at birth, he can present withdrawal symptoms. This is due to the hyper-stimulation of the nervous system that this lack produces.

NAS can last from 1 week to 6 months and generates psychological, psychosocial and clinical alterations. The symptoms that usually occur are:

Of course, the severity of these symptoms depends on the type of drugs that the pregnant woman has consumed, the amount, the period of time for which she took them and the time the baby was affected by this consumption.

To detect withdrawal symptoms in infants, the mother should be consulted about the factors mentioned above. Logically, it’s necessary that she be totally honest when responding in order to face the problem correctly.

In addition, urine tests can be performed on the mother, to evaluate the symptoms according to the Finnegan scale (a scoring system for NAS that gives points according to the severity of the patient to determine their treatment) and a toxicological examination of urine and the first stools of the baby.

Something similar happens with treatment. It will depend largely on the type and quantity of drugs that the mother consumed and what the baby was exposed to.

In the first week, the doctors will monitor the baby’s state of health, analyze how he sleeps, if he feeds well, if his body works efficiently, and if any withdrawal symptoms are observed. They will also assess his weight gain and growth as well as his muscle density.

The simplest methods of soothing a baby with NAS consist of surrounding him in a calm atmosphere, gently rocking him and speaking into his ear.

Next, you can prescribe a drug similar to that consumed by the mother during pregnancy and reduce the dose little by little. This is only necessary in half of the babies who suffer from this disorder.

If the symptoms are serious, your doctor will prescribe other drugs such as phenobarbital or clonidine. They will also make a more extensive and progressive treatment.

As for food, a very delicate topic at this age, the baby is provided with foods with a higher caloric content, to compensative for the lack of nutrients.

66% of the children of women who used drugs, alcohol or tobacco throughout pregnancy or in their last stage have symptoms of NAS.

In addition, studies like the one carried out by specialists from the Faculty of Nursing, Physiotherapy and Podiatry of the University of Seville, Spain affirm that in Spain, a worrying increase in drug addiction has been found in today’s society.

In the United States, the numbers are equally alarming – the percentage was higher than 7.4% in 2010 for women 25 years old.

“In Spain, 3% of pregnant women use illegal drugs.”

Although it seems obvious to emphasize it, the only way to prevent NAS is for the mother to stop using drugs.

It’s essential to make an effective awareness campaign so that women (especially pregnant women) know the harm that this practice can cause in their fertility, as well as for their future baby.