Paracetamol During Pregnancy: Side Effects

Taking paracetamol during pregnancy is safe and doesn't usually cause problems. However, there are some related risks and side effects every pregnant woman should know. 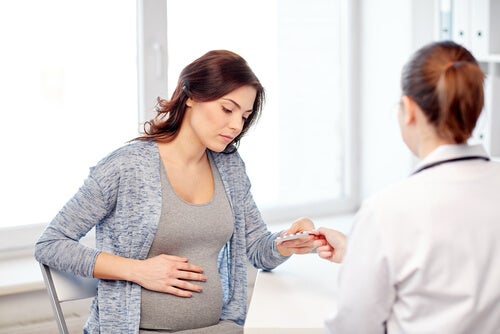 Below we’ll talk about some of the possible side effects of taking paracetamol during pregnancy. Though one of the safest drugs during pregnancy, its use is not risk free. We must take a controlled dose, and always follow a doctor’s prescription.

Paracetamol: what is it?

This drug is an antipyretic analgesic, which means it both reduces pain and eliminates fever. It has no anti-inflammatory effect and is commonly used to relieve headaches, back pain and colds.

About 60% of pregnant women are thought to use it. Nevertheless, this is a drug that can go through the placenta. This means it can reach the fetus, causing unwanted risks and side effects for gestation.

What are the effects of taking paracetamol during pregnancy?

When we don’t use it for a prolonged period of time, paracetamol is a safe drug as long as a doctor has prescribed it. It’s usually prescribed to ease some discomfort during pregnancy, such as headaches, back pain and colds.

It’s important to avoid self-medication, due to the side effects this painkiller can have on the fetus. More so when this is a medication commonly found at home. Some of these side effects are:

When consumed during the second and third trimester, paracetamol can cause asthma in the baby. According to some studies, the risk of suffering from asthma is 25% higher in babies whose mothers have taken this drug.

The use of this medication is also linked to the likelihood of the baby having allergies and other respiratory problems.

Administering paracetamol for a long period of time during the third trimester can cause cognitive and motor problems in the fetus.

A study reveals that mothers who used paracetamol more than 28 days in a row bore children with lower cognitive development. They also had behavior issues and a worse motor development.

Taking paracetamol during pregnancy for over 28 days may also cause reproductive issues in male babies.

Because it reduces testosterone levels, it can carry a risk of infertility and cryptorchidism (undescended testicles). This means the testicles don’t descend into the scrotum, remaining in the inguinal canal or the abdomen.

Another risk associated with paracetamol during pregnancy is related to ADHD. According to research led by the University of California, there is a link between this drug and Attention Deficit Hyperactivity Disorder.

Children whose mothers took paracetamol during pregnancy are between 13% and 37% more likely to suffer from ADHD.

Women who take this medication and suffer from hypertension (elevated blood pressure) are at risk of having a premature childbirth.

We must clarify that paracetamol doesn’t usually carry a risk of miscarriage or premature birth. This is only, as we’ve mentioned, in women with a history of high blood pressure.

Though paracetamol is one of the safest drugs during gestation, its prescription can carry risks.

Both the duration of treatment and dosage of the drug are key to avoiding any dangers. As mentioned, paracetamol during pregnancy is safe – in spite of the associated risks – provided that we use it in a controlled manner and with a doctor’s prescription.

It’s advisable not to take over 4 grams a day, and to wait 6 to 8 hours between doses. Also, we should only take it when there is a real need.

So, how do we treat discomfort during pregnancy?

We’ve seen that taking paracetamol during the gestation stage can have side effects. What alternatives do we have, then?

We should learn about alternative and natural methods to ease discomfort. There are many options: natural remedies, homemade pain relievers, massages, light exercise, etc. If you can treat your discomfort in a less aggressive way, you’ll be improving your baby’s health. 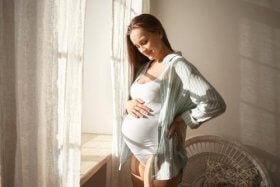