Learn All About the Placenta and Placental Abruption

In this article, learn all about the placenta, a temporary organ, as well as placental abruption. 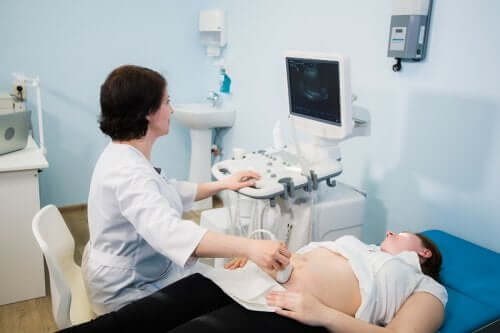 Learn all about the placenta and placental abruption in the following article. The placenta is a vital organ that connects mother and baby. It’s the means by which the fetus receives all the necessary nutrients to develop.

Now, it’s said that a woman has a normal placenta when it’s positioned correctly and, therefore, won’t cause any problems if it moves.

As the pregnancy progresses, it’s normal for the placenta to gradually rise until it completely separates from the opening of the cervix. This allows the baby to come out into the world during birth.

How a normal placenta evolves

During pregnancy, this temporary organ matures. These stages of maturity can be checked via ultrasounds. In the following list, we detail each of these stages:

The life of both mother and baby is at risk in cases of placenta accreta.

The placenta is formed by a maternal component called the “chorionic plate” and a fetal placenta known as the “fetal plate.” The first consists of amniotic epithelial cells and a conjunctiva, formed by the axis of the first order villous trunks. As for the second, it consists of syncytiotrophoblast and cytotrophoblast residue, as well as by Nitabuch’s fibrinoid layer.

Between the two plates lies the intervillous space that contains the chorionic villi, which are initially constituted by trophoblastic tissue, which will then become the placenta. The placenta should be located in the back of the uterus.

On the other hand, “placenta previa” is when the placenta is located in the lower part of the uterus.

The development of the placenta begins with embryo implantation, when the trophoblast cells penetrate the blood vessels of the uterus and establish a connection between mother and baby.

Placental abruption is when this temporary organ detaches from the uterus early, before the 20th week of pregnancy and before the third trimester of pregnancy.

This condition can manifest as external or internal bleeding. In the case of the latter, the blood remains between the placenta and uterus.

The most common sign of placental abruption is vaginal bleeding, which is usually not as abundant as in cases of placenta previa.

The most common symptoms are vaginal bleeding and painful contractions. Generally, the bleeding will depend on the magnitude. However, the blood may build up and remain between the placenta and the uterine wall (occult bleeding).

In short, the degrees of placental maturity allow doctors to know the development of said organ, which can be seen through an ultrasound. This test allows doctors to analyze whether the pregnancy is developing as it should. If you notice any unusual signs, you must consult a specialist.

Symptoms and Causes of Placental Abruption
Placental abruption is a serious condition that occurs when the placenta separates from the uterine wall before childbirth.  Read more »
Link copied!
Interesting Articles
Preparing for childbirth
Self-Hypnosis in Childbirth: What You Should Know