Symptoms and Causes of Placental Abruption

The detachment of the placenta in pregnant women is considered one of the most severe complications that can arise. Find out more about it in this article. 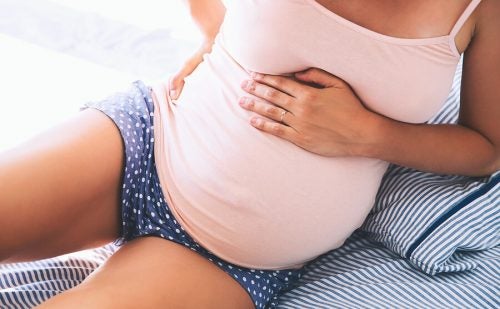 Placental abruption is a serious condition that occurs when the placenta separates from the uterine wall before childbirth.

The placenta is in charge of providing the baby with oxygen and nutrients through the umbilical cord. If the abruption is significant, it can pose a great risk for the baby’s life.

Only 5% of pregnant women suffer from this condition. But many of those who have it, only get the effects of a partial abruption, which is when a small part of the placenta detaches from the uterine wall.

Learn more about this issue below.

First of all, it’s important to explain what the placenta is and its functions. The placenta is known as a sac or a “bag” that adheres to the uterus. Apart from the aforementioned functions, it also produces a group of hormones that support pregnancy, such as progesterone, estrogen and chorionic gonadotropin.

The placenta attaches to the uterus through multiple blood vessels. When it detaches, hemorrhage occurs. And along with the bleeding, there’s of course pain due to the breaking of said vessels.

However, not all placental abruptions have the same degree of separation. In obstetrics there are three different degrees of classification.

There are three degrees that classify the detachment of the placenta:

Symptoms of class 1 of placental abruption are: mild to non-existent vaginal bleeding, and even no contractions at all.

This degree of detachment doesn’t represent a true danger to the fetus, but doctors recommend getting treatment and rest.

When a pregnant woman has a class 2 abruption, symptoms intensify, there’s heavy bleeding and contractions. Symptoms also start to affect the baby’s health, by altering his heart rate. If this occurs in weeks 24 to 34 of pregnancy, the patient will have to be hospitalized.

Class 3 is known as a total abruption which is why the mother will have to go through an emergency C-section immediately.

Due to blood loss, it’s likely that the mother will receive a blood transfusion. Moreover, the doctor will decide if it’s necessary to perform a hysterectomy.

Placental abruption isn’t a very common pathology and its causes aren’t very clear either. Of course, the detachment of the placenta can be caused by trauma, but among the risk factors there’s:

“The placenta attaches to the uterus through multiple blood vessels. When it detaches, hemorrhage occurs. And along with the bleeding, there’s of course pain due to the breaking of said vessels.“

Consequences of placental abruption for the mother’s body

The effects in the mother’s body are coagulation problems and weakness because of blood loss, which will lead to blood transfusions and kidney or heart failure. In severe cases, hysterectomy is usually performed.

Consequences of abruption for the fetus

In the fetus, the effects of abruption are lack of oxygen, increased heart rate, preterm delivery and impaired growth, due to not receiving enough nutrients.

As a final tip, keep in mind that in most cases this condition may randomly appear. However, you can reduce the risks by being healthy throughout your pregnancy and by undertaking the necessary inspections with your obstetrician.