Prenatal Depression: What You Should Know

Pregnancy is a very important part of a woman’s life. It lasts a long time, causes lots of changes in your body and generates a wide range of emotions. If your low moods persist, it's possible that you're suffering from prenatal depression. 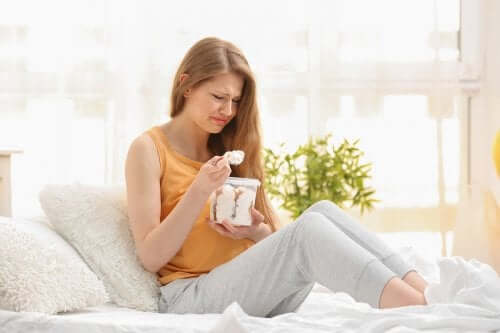 It’s very normal to feel confused, nervous, sad or anxious during pregnancy. The hormonal changes taking place in your body can generate a range of emotions and feelings, even completely contradictory ones. But when sadness lasts for a long time, this can turn into prenatal depression: a complex condition that requires attention.

When negative emotions last for a long period of time, it can lead to prenatal depression. People who know someone who’s pregnant, should be aware of certain signs which we’ll talk about in this article.

Signs of depression during pregnancy

A common mistake is attributing depression to lonely people who have economic, marital or other kinds of problems. However, prenatal depression is much more common than people think: it affects 1 in 10 women during pregnancy.

The main problem with this illness, which is more common than other more well-known illnesses, such as pre-eclampsia, is that many future mothers feel ashamed to admit they have it. It’s for this reason that the people around them should keep an eye on their health.

As a general rule, prenatal depression starts to manifest between weeks 6 and 10 of pregnancy. It’s also common in the last 3 months of pregnancy, as your due date approaches.

There are certain signs that can mean you’re more predisposed to suffering from depression. Among the biological causes of prenatal depression, certain studies suggest that the presence of antibodies causes a drop in thyroid hormones, which directly influence your mood and energy levels.

We can also look at the calming action of progesterone: a hormone that increases its levels during pregnancy. Finally, the study suggests that psychological issues are also to blame. These include:

“Prenatal depression is much more common than people think: it affects 1 in 10 women during pregnancy.”

However, when these are combined with sadness, episodes of crying and the inability to enjoy activities that you previously enjoyed, there is clearly a problem that needs to be addressed. Other symptoms can be:

On top of this, you may show no interest in the arrival of your child, you may even show rejection towards the idea of having to give birth.

Prenatal depression is associated with issues such as premature birth or being underweight at childbirth. These complications are normally caused by dietary problems, the increased likelihood that you’ll begin to abuse drugs or other harmful substances and the lack of prenatal check-ups.

Regarding treatment, the first step – which is very important – is detecting the problem in the first place. Then you can proceed to psychological intervention such as social support for you and for your family, psychological or psychiatric therapies or antidepressants.

On top of this treatment, it’s important that you have a stable home environment. Your partner and your family need to provide support and love in order to maintain emotional stability.

In fact, this is a task that is often carried out by health care professionals, who have direct contact with you and are well equipped to detect any anomalies in your behavior.

5 Must-Have Items for Your Premature Baby
The best thing to do when your premature baby arrives is to equip yourself with the items your family needs to overcome the demands of this situation. Read more »
Link copied!
Interesting Articles
Preparing for childbirth
Self-Hypnosis in Childbirth: What You Should Know