Pregnancy is a special time in a woman's life, but some pregnancies present pressure-related difficulties. In fact, this stage is characterized by psychological changes, as well as physiological issues. 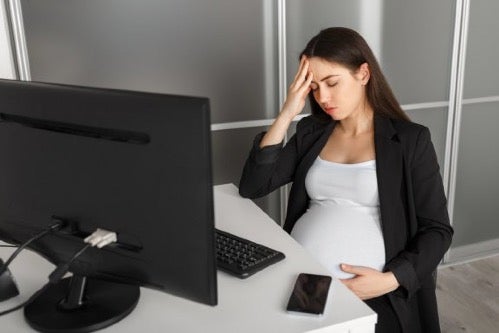 Without a doubt, pregnancy can be a time of great happiness. However, it’s important to keep in mind that it’s also marked by emotional fragility.

Women are susceptible to various psychological changes during pregnancy, including fatigue and intense depression.

Bodily changes, fear of childbirth, and questions about one’s fitness for motherhood can produce anxiety in those expecting. Unfortunately, the psychological changes during pregnancy can be intense and, often, worrisome.

What changes are we referring to? How do they manifest? And what are the recommended remedies? In this article, we’ll answer all of these questions.

Pregnancy is a time filled with physical and physiological changes. Over the course of the gestation period, a woman may experience psychological disorders such anxiety, depression, and psychological fatigue.

For pregnant women, mood swings can happen for no particular reason. They’re strongly influenced by the hormonal disruptions during the first trimester of pregnancy. These can alter a woman’s behavior, how she perceives things, and her general mood.

Unfortunately, mood swings during pregnancy can be difficult to overcome, as they usually manifest themselves in unusual ways. These may include an aversion to certain smells and foods, as well as vomiting and nausea during the initial stage.

This period is usually marked by questions, doubts about the pregnancy, emotions, anxieties, and fears, which can lead to serious disorders.

Depression is an illness that affects one’s thoughts, actions, and feelings. Some pregnant women are more vulnerable to depression during this time of their lives, and experience real suffering.

In addition, hormonal changes during pregnancy often cause depression and anxiety. Tensions in the relationship, combined with a physical malaise, can lead to depression in pregnant women.

Depression during pregnancy needs to be treated because it can cause serious problems like miscarriages and premature births. Therefore, it can also mean problems for the infant, such as a low birth weight.

Pregnancy isn’t necessarily a time of pure joy. For many women, it’s also a period marked by anxiety and fear. A woman’s body undergoes transformations and changes that can disrupt her daily life.

In addition, hormonal changes can sometimes increase emotional instability, which is why some women suffer from anxiety.

As we mentioned earlier, expectant mothers experience intense psychological disorders during the final months of pregnancy. This period leads to many questions and concerns, which include:

“Bodily changes, fear of childbirth, and questions about one’s fitness for motherhood can produce anxiety in those expecting.”

In summary, a pregnant woman’s anxiety can cause an increased risk of premature birth or low birth weight.

As such, it’s important to properly manage this during the gestation period. Fortunately, in the majority of cases, the anxiety doesn’t lead to serious consequences.

Expectant mothers experience changes in the physical and psychological states during the three trimesters of pregnancy. These are the key characteristics of each stage:

Third trimester: this stage usually means the return of the fatigue. Sleep can also be disturbed. At this point, the uterus and the baby begin to weigh on the mother’s body. For these reasons, it’s natural to feel tired during the final trimester.

The expectant mother is subject to considerable psychological changes during pregnancy. As a result, she’ll need both physical and emotional support. The role of her partner is essential!