Your Sense of Smell During Pregnancy

Many women notice an increased sense of smell when they become pregnant. Learn about some of the changes that can affect your sense of smell during pregnancy. 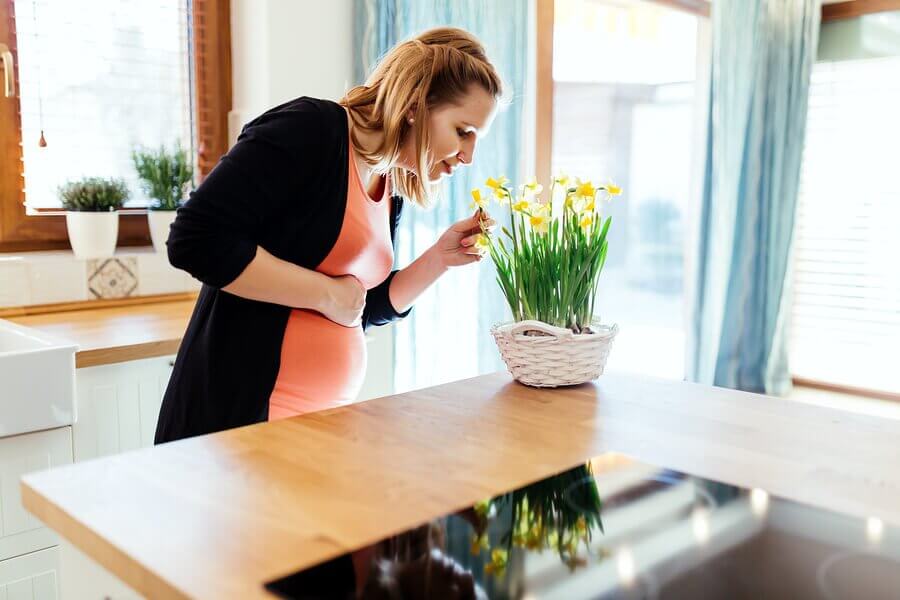 During pregnancy, many women notice changes in their sense of smell. It may happen with certain foods, and also with hair products and body odor. In fact, it can provoke nausea, anger, and even episodes of depression.

Due to the links between smell and taste, an aversion to certain foods can go hand in hand with a change in the sense of smell during pregnancy. This normally happens during the first trimester and can even lead to bouts of morning sickness.

Likewise, many studies confirm that a heightened sense of smell during pregnancy is common. Most pregnant women notice greater olfactory sensitivity at some point.

However, some women only notice a mild change in their sense of smell. Others finds that some odors become overwhelming. In the vast majority of cases, everything returns to normal once the baby is born.

Your sense of smell during pregnancy

Pregnancy affects every woman’s body differently. You never know exactly how each mother will respond to a given smell.

Unfortunately, there’s no way you can avoid smells that make you nauseous until you know which ones they are. However, you should know that there are many ways to avoid them.

Among other tips, you can reduce the probability of coming in contact with smells that might cause problems by avoiding certain food and drinks.

At the same time, you might want to wash your clothes more often as the fibers may retain smells and keep them around longer than you would like.

Causes of changes to your sense of smell during pregnancy

It’s not clear why women react differently to certain smells when they’re pregnant. However, it may be due to the following factors:

The volume of plasma in the body almost doubles during pregnancy. This means that everything it moves, from the blood to the brain, happens more quickly and in greater quantities. This, in turn, makes you more sensitive to smells that your olfactory receptors captures.

The increasing levels of estrogen and hormones during the first trimester can cause nausea and vomiting. If you’re already nauseous, a strong odor can worsen the issue.

Keep in mind that a heightened sense of smell is closely related to morning sickness.

Your sense of smell can even be a defense mechanism to keep you far away from toxins and other poisons that could affect your baby’s development. In this case, it could be an instinctive action with origins in our ancestors.

“However, some women only notice a mild change in their sense of smell. Others finds that some odors become overwhelming.”

How can you improve your sense of smell during pregnancy?

Here’s some advice you can follow to improve your sense of smell during pregnancy. If these changes don’t help and certain smells still make you nauseous, check for natural remedies that can relieve your symptoms.

Finally, remember that it’s normal for your sense of smell to be changed during pregnancy. But don’t worry. In the majority of cases, it returns to normal after the baby is born.

The Heightened Sense of Smell During Pregnancy
During gestation, it's normal for women to experience a heightened sense of smell due to an increased production of certain hormones. Read more »
Link copied!
Interesting Articles
Preparing for childbirth
Self-Hypnosis in Childbirth: What You Should Know