Can The Shape of a Woman's Belly Indicate Her Baby's Sex?

For many years, myths have been going around regarding the shape of a woman's belly during pregnancy. Is there any truth to these beliefs? Or are they really just old wives' tales? 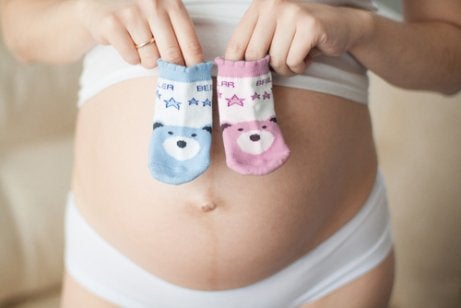 Without a doubt, you’ve heard someone say that the shape of a woman’s belly can tell you whether she’s having a girl or a boy. But is this really a trustworthy technique?

If you’ve never heard this before, it might seem like a thing of the past. But it definitely isn’t. Many pregnant women and mothers affirm to this day that the shape of your gestating belly can predict whether you’ll give birth to a boy or a girl.

In fact, they claim that you can even predict how far along women are just by observing the size of their bellies. These types of affirmations are nothing more than urban legends.

There is no scientific evidence to show that these predictions are true. To date, the only way to determine a baby’s sex before birth is with an ultrasound.

The truth is that the hormonal changes that women experience during pregnancy produce changes in skin color. This is the reason behind the appearance of this line. The line has always been there, but pregnancy can suddenly make it more noticeable.

What factors determine the shape of a woman’s belly during pregnancy?

There are several factors that influence the shape of a woman’s belly during pregnancy. These factors can act independently or together. Below we’ll mention some of these factors and tell you more about them:

The size of the fetus

The fetus’s position within the pregnant woman’s belly

Some subscribers of these myths strongly affirm that if a mother’s belly is pointy, she’ll be the proud mother of a boy. However, if her belly is more round and evenly distributed – according to the same myth – she’s expecting a girl.

While babies develop in their mothers’ womb, they change from one position to the next. As a result, the shape of pregnant women’s bellies changes constantly and, therefore, is no indication of a baby’s sex.

If you’ve already had children before, then your uterine muscle is longer thanks to your prior pregnancies. This means that your belly will appear wider than in your first pregnancy.

“To date, the only way to determine a baby’s sex before birth is with an ultrasound.”

Location of the placenta and the amount of amniotic liquid

If a woman has a large quantity of amniotic liquid, then her belly will appear much larger. The shape and size of her belly will also depend on where the placenta is located.

Some women have very defined physical traits that can determine the shape of her belly. One of these includes the presence of scoliosis. When a pregnant woman has a deviated spine, this may cause her belly to appear more prominent.

A woman’s frame is also a determining factor. Very thin women will appear to have enormous bellies because of how they contrast with their figures. However, larger frames tend to conceal the belly more, making it appear smaller in comparison to the mother’s figure.

It’s clear that there are many factors that influence the shape and size of women’s bellies while they’re expecting.

When it comes down to it, the appearance of your belly doesn’t really matter. What matters most is that you’re healthy and that your baby has a perfect place to develop for 9 months. No body is exactly like another, so don’t expect your pregnancy to look just like someone else’s.

There may be similarities, but the changes that a body experiences during pregnancy will still vary from one woman to the next.