Symptoms During the First Trimester of Pregnancy

We should be very attentive to the symptoms during the first trimester of pregnancy. Find out what they consist of in this article. 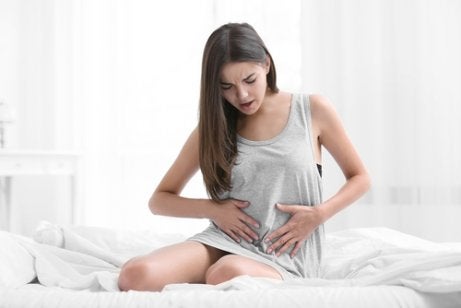 Pregnancy usually brings joy and excitement to the expectant mother, who is preparing to give life to a new being. However, symptoms during the first trimester of pregnancy can be quite intense.

During this period, hormonal alterations occur that prepare the body to house a new life form. Each body is different, but all women face similar symptoms: discomfort in the breasts, nausea, fatigue, excessive sleepiness, sudden mood swings, an increased sense of smell, heartburn and decreased or increased appetite.

However, one of the key signs is the lack of menstrual bleeding.

Pain in the ovaries: beware of the cause

Before confirming the pregnancy, it’s common to feel a slight pain in the ovaries (similar to that of the start of the menstrual period). This discomfort is usually accompanied by a pinkish or brown bleeding, due to the implantation of the fertilized ovum in the uterus.

Pay attention to the consistency and color of the liquid, as its appearance will indicate what it is. It often occurs one or two weeks after conception. Profuse bleeding after pregnancy is a reason to visit the gynecologist immediately.

Although it’s ideal to go to the doctor to confirm the status, a home pregnancy test can be taken one day after a delay in the menstrual period.

What are the symptoms during the first trimester of pregnancy?

Some of the symptoms during the first trimester of pregnancy include breast tenderness, nausea, exaggerated fatigue, and exhaustion. These discomforts can occur during the first month, but they become more acute in the second.

Some women prefer changing their bra to a more comfortable one, without underwire, that adapts to the new size of the breasts, which will continue to grow.

Additionally, it’s possible to notice a darker color in the aureolas, around the nipple, which may become larger. The appearance of small rashes similar to pimples is also common.

Sometimes nausea manifests with mild dizziness. It can happen at any time of the day, but the morning hours are usually the most difficult. They won’t always cause vomiting, but many mothers call it “morning sickness.”

The third month is approaching: what awaits the mother?

It’s not often that during the third month the belly is visible to the naked eye, but some women may have a certain bulge. By this time, the breasts will look bigger, more sensitive and with marked veins, while the halo will be darker.

Changes in temperament are a constant. These shocks will be drastic and the mother may experience anguish or fear that her pregnancy won’t end successfully.

We must remember that after this period, the chances of going through an abortion decrease considerably. Support from the partner and from loved ones will be decisive.

Weight gain can cause skin damage. Hence, it’s advisable to start applying creams as soon as possible to prevent the dreaded stretch marks. It’s appropriate to moisturize the belly, hips, and breasts.

However, it’s not all bad: your hair will look great and nausea will have almost disappeared by the end of this first trimester.

Sometimes the mother will require a particular nutrient or may lack the energy to continue the journey. Your choice of “craving” is headed by easily digested carbohydrates. But your mood can influence it, so chocolate is often rated as the favorite.

In addition, the second month of pregnancy is the right time for the first ultrasound. However, a consultation beforehand will offer greater security. The sooner the clinical accompaniment begins, the better.

It’s exciting to know that, by the eighth week of pregnancy, you can already hear the baby’s heart beating. At this point, you can rule out problems related to poor positioning of the fetus in the uterus.

Despite everything that can be said, nothing is certain when talking about the symptoms during the first trimester of pregnancy. Each woman will experience them in a different way.

What is clear is that proper nourishment and a healthy lifestyle will help prevent complications.